A weird, violent and very unpredictable film, Dan Gilroy director of one of my all-time favourite films: ‘Nightcrawler’, works all his charm and creativity into this horror/drama/mystery/dark comedy? It’s difficult to pinpoint what exactly what the genre of this film is. Alongside this, similar to some other films I’ve reviewed, I’d say this is definitely not a film for everyone. But for those who it will appeal to, you will surely enjoy yourself.

Plot Summary: Following the discovery of a series of foreboding paintings by an unknown artist, a supernatural force enacts revenge on those who have allowed their greed to get in the way of art.

The film is mostly built around the shocking deaths throughout the film, as various characters get killed off in different ways. Leaving the rest of the characters in a state of confusion and panic, this allows the film to delve into bits and pieces of characterisation (granted not a lot) in addition to exploring various ideas of what ‘art’ actually is and we criticise and commercialise it, and despite the film not going incredibly in-depth with these ideas, I did still find many of them and the themes of greed and ego interesting.

Jake Gyllenhaal is essentially the main protagonist of the film: ‘Morf Vandewalt’ a very eccentric and strange character who seems to be a parody of over-the-top art critics. Rene Russo, Zawe Ashton, Toni Collette, Natalia Dyer and John Malkovich also all lend their talents to the film. Along with the decent writing, their great performances really help give each character a distinct personality. Unexpectedly however, Zawe Ashton is a true standout of the film for me, only really knowing her from Channel 4’s ‘Fresh Meat’, here she portrays a very different character than ones before.

The cinematography by Robert Elswit also gives the film a very clean look, utilizing many different shots throughout. I still do think the film could’ve done more with the camera work though, especially when compared to Dan Gilroy’s previous films. The does also combine cinematography well with the beautiful sets and locations, giving the film a great visual appeal overall. The original score by Marco Beltrami and Buck Sanders also lends it’s hand to the creepy atmosphere at multiple points throughout the film, yet can also change to more calming or light-hearted when it needs to.

Although the tone can really vary throughout the film, it never comes off as unbalanced. Comedy is used at points during the story but never to the point of ruining the eerie atmosphere or character moments. When the film does shift into full horror however, we get easily my favourite moments of the film, as it’s these moments we get some very cool CG effects and unique visuals. As well as a great build-up of intrigue and tension, with the eventual death at the end of the scene usually being very creative, despite not always being very gory.

My main two issues with the film resolve mostly around the pacing of the film, as the film can come off as very slow and can really drag the story down at points. As well as the use of John Malkovich’s character: ‘Piers’, as this character appears in the very first scene of the film and then again later into the runtime. However, he doesn’t really have any impact on the overall narrative, and really felt to me like the film was just using his bland character to fill up screen-time.

I wasn’t entirely sure what I thought of: ‘Velvet Buzzsaw’ on my initial viewing of the film, as the film does suffer from some problems and isn’t quite the incredibly entertaining piece of gory fun I wanted it to be. But I still enjoyed myself through its weird atmosphere and interesting ideas, and it is a film I could maybe see myself returning too at some point. A decent 6/10 overall. 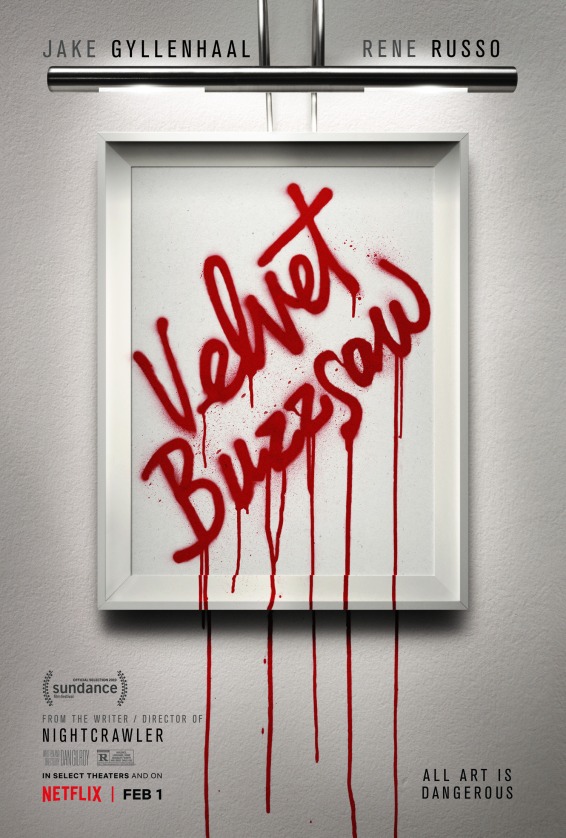