While in years gone by many films surrounding the subject of autism have been seen as overly simplistic or even offensive, with Hollywood often treating characters with ASD like an immeasurable burden upon their entire family, every now and then we receive a film which presents its autistic character (or characters) with respect and authenticity alike, with 2017’s ‘Please Stand By’ being one such example. Directed by Ben Lewin (Georgia, The Sessions, Falling for Figaro) and based on the 2008 play of the same name by Michael Golamco, ‘Please Stand By’ may hit many familiar beats for a coming-of-age comedy-drama, but with an excellent cast and a subtle sci-fi twist thanks to its focus around all things ‘Star Trek,’ ‘Please Stand By’ manages to keep its story diverting throughout its brief runtime.

Plot Summary: When ‘Wendy Welcott,’ a young autistic woman with a gift for writing, learns that Paramount Pictures is holding a screenwriting competition to celebrate ‘Star Trek’s 50th anniversary, she swiftly writes her own screenplay for submission. But on account of her condition and a great deal of ignorance from those around her, ‘Wendy’ is unable to submit her screenplay in time. So, seeing no other option, ‘Wendy’ decides to leave her group home in Oakland and travel to Los Angeles to deliver her screenplay in person…

Although the film’s screenplay (which is actually written by Michael Golamco) rarely breaks the mould of your typical coming-of-age narrative, ‘Please Stand By’ still has more than its fair share of heart-warming moments. And whilst some may argue that the film’s continuously upbeat tone robs the story of any real stakes, ‘Please Stand By’ isn’t really a film that aims to paint an incredibly dramatic tale of self-realisation, family and belonging, but instead a film that effectively balances all of those themes through a charming and light-hearted story of a woman embarking on a journey across California in dedication of her favourite science fiction franchise.

In what would’ve been the film’s most criticised performance should it have been executed poorly, Dakota Fanning’s performance as ‘Wendy’ is one of the more thoughtful and accurate portrayals of on-screen autism in quite some time. From her social awkwardness to her flailing arm movements and stiff dialogue readings, Fanning successfully captures the functional spectrum of autism in a delightful and intriguing expression of independence and passion, as due to ‘Wendy’ having few experiences outside of her sheltered routine, the road-trip she embarks upon makes her feel truly unconstrained for the first time in her entire life, both for better and for worse. Meanwhile, her caregiver and older sister wonderfully portrayed by Toni Collette and Alice Eve, respectively, attempt to track her down and bring her home, fearing for her safety and greatly doubting her abilities.

When it comes to visuals, despite the ceaselessly vibrant colour palette, the cinematography by Geoffrey Simpson hardly ever veers away from immobile close-ups and/or mid-shots. But where the camerawork truly shines is during the scenes where the film attempts to recreate shots from classic ‘Star Trek’ episodes, as the Mediterranean climate of Los Angeles is quickly swapped-out for the strange alien worlds of: ‘Wendy’s imagination, all the while we hear ‘Wendy’ as she reads excerpts from her ‘Star Trek’ screenplay through calming voiceover.

In a similar sense to the visuals, the original score by Heitor Pereira rarely does anything exceedingly innovative as far as soundtracks go, with the majority of the runtime relying more on the use of lesser-known indie songs such as: ‘Take Me as I Am,’ ‘All or Nothing’ and ‘Waves.’ Yet the score once again becomes much more interesting once we are transported into ‘Wendy’s screenplay, as the original score morphs into something that wouldn’t seem out-of-place in an actual ‘Star Trek’ film.

Along with recreating shots, ‘Please Stand By’ also pays homage to ‘Stark Trek’ history in nearly every aspect of its production. Firstly, the name tags of: ‘Wendy’s work collogues use the same font as the opening titles of: ‘Star Trek: The Original Series.’ Secondly, the mountain ranges seen in the background of the screenplay sequence are the Vasquez Rocks located in Agua Dulce, California, this area has been an extensively used location for many ‘Star Trek’ films and series, but most notably, for the 1966 episode: ‘Arena.’ Lastly, the suits worn by ‘Captain Kirk’ and ‘Spock’ during this same sequence are similar to suits worn by the characters in the 1968 episode: ‘The Tholian Web,’ visibly proving that the filmmakers did their research when it came to the franchise and its ardent followers.

Overall, whilst Golamco’s admittedly predictable screenplay does place the film more in the mid-range of coming-of-age comedy-dramas, by letting the talented actors simply do what they do best, director Ben Lewin does make ‘Please Stand By’ palatable even in its most commonplace moments. And although I obviously can’t speak for everyone in regard to how well the film truly portrays autism given my position, in my eyes, this low-budget flick handles the potentially challenging concept adroitly, displaying the challenges of a life with ASD without ever devolving into a exaggerated collection of tics and quirks, insulting those who may be on the spectrum. Final Rating: 7/10. 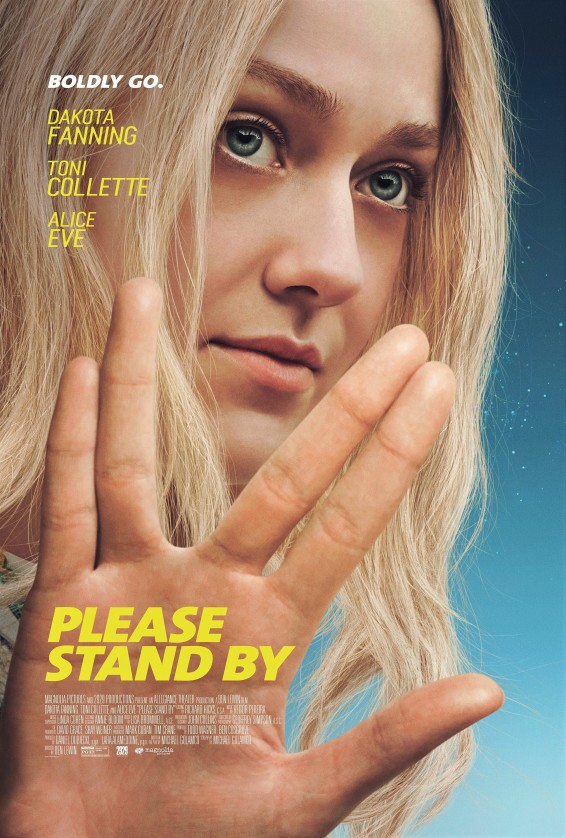