An interesting film for sure, ‘Free Fire’ directed by Ben Wheatley (Kill List, Sightseers, High-Rise). Thrusts it’s audience straight into a world of blood, bullets and amusing quips. Setting the entire story in one single location, which truly helps the film in setting itself apart from other films within its genre, and I really do appreciate the effort that went into this film in order for it to be as entertaining as it is, and whilst not perfect, the film is still mostly entertaining and amusing throughout.

The story takes place in an abandoned Boston warehouse in 1978, where after a gun-deal goes awry. The warehouse turns into a chaotic fight for survival, with the narrative set in one single location as already mentioned, this meant Ben Wheatley could truly show off his directing/writing skills to their full extent. As the characters are the complete focus of the film from beginning to end.

As the film is set in the 1970s, the film is littered with 70s style. Everything from the costumes, to the original score, to even the colour palette gives fit extremely well with the film’s tone. It’s clear from the style of the film and the witty dialogue that director Ben Wheatley was obviously inspired by early Quentin Tarantino and Martin Scorsese films, which makes complete sense as crime seems to be his go-to-genre for the most part.

The entire cast here are all doing a great job of fitting film’s tone, as although there are a few comedically dark moments, the film is mostly lighthearted. As the cast’s performances back-up this tone very well, giving the film an over-the-top and comedic outlook on the situation. I also enjoyed the sound design for the weapons in this picture, as I felt like each gunshot actually had an impact, not just that the actors were playing with props. I would say Armie Hammer as: ‘Ord’ as well as Cillian Murphy as: ‘Chris’ were easily my personal favourites of the cast, as I always found myself enjoying their very charismatic and cocky personas throughout the runtime.

Despite it being nothing amazing, the cinematography by Laurie Rose is decent enough throughout the majority of the film. Although I do believe there is a bit too much of a reliance of a hand-held camera at points, as I feel a still shot would be welcome more than a few times and as already mentioned, the original score by Geoff Barrow backs up that time-period very well. However, the soundtrack itself is pretty forgettable outside the rest of the film.

The best compliment I can give this film is without a doubt the writing. As although the characters get barley any development throughout the narrative (relying mostly on the actor’s charismatic performances) the writing never fails to implement humour, or extremely-tense scenarios nearing the end of the film. This is a shame however, as I do feel a character-arc would have worked very effectively for one of the greedy, egotistical characters on display.

Overall, I would say I enjoyed: ‘Free Fire’, it definitely isn’t perfect due to its weak characterisation, over-reliance on hand-held shots and maybe a few missed jokes here and there. But still an enjoyable watch, and a nice 1970s throwback nevertheless. Plus the original concept of the narrative always intrigued me, and must be appreciated for its creativity alone. I’d give the film a high 6/10. Give this one a watch if it sounds like something you might enjoy. 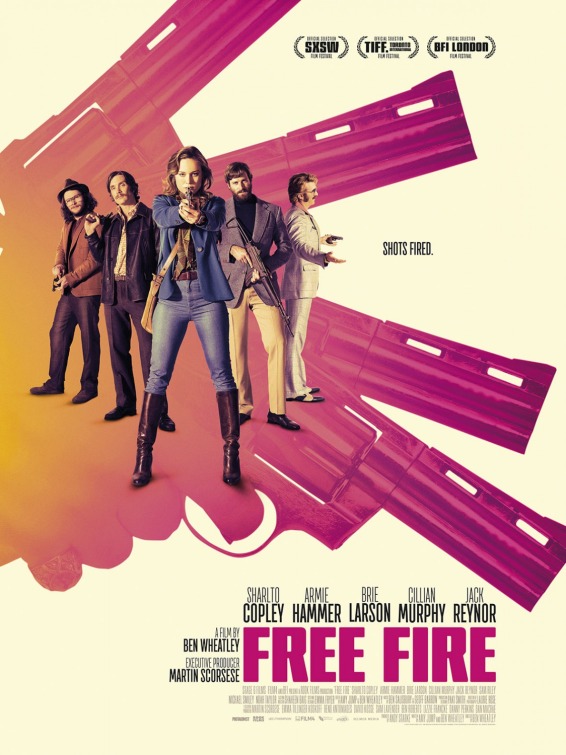