‘Bird Box’ is based-on the novel of the same name by Josh Malerman, which mostly aims to be a dark horror/thriller with an original and twisted story as well as a few other interesting aspects in regards to its filmmaking. Unfortunately however, the film soon falls into a pit of disappointment which it really struggles to escape from, resulting in ‘Bird Box’ becoming nothing more than another generic Netflix fright-fest.

Plot Summary: Set both during the initial incident as well as five-years after an ominous unseen presence drives most of society to suicide, a mother and her two children make a desperate bid to reach safety as they head down a dangerous river aboard a boat.

As the film jumps back-and-forth between the two different time-periods, the film’s structure can become very frustrating at points. As I personally found the initial chaotic event far more entertaining than the other time-period the film provides, yet this was always cut short as the film continuously cuts between the two at unusual points. The film also chooses to wrap the majority of its story in mystery, never really exploring what the monsters actually are, or how their abilities work. The film even chooses to never actually show the creatures on-screen at all throughout the runtime, and although I agree that not everything has to be explained within a story, the way ‘Bird Box’ presents it makes it noting but frustrating, as the film introduces questions without answers.

Sandra Bullock portrays a struggling mother alongside Danielle Macdonald, Trevante Rhodes and John Malkovich who all portray people attempting to survive in a brutal world, and they do their best considering the weak characters they had to work with. The majority of the supporting cast are also decent, with Sarah Paulson even having a short appearance within the film. However, I actually found she was incredibly wasted in the small (and mostly pointless) role she had within the narrative.

The entire visual presentation of: ‘Bird Box’, is extremely dull, as the cinematography by Salvatore Totino and editing Ben Lester never really excel beyond ‘okay’. Usually having scenes consist of many boring shots which never really add much to the tension or atmosphere aside from the occasional moment, this of course also alongside the extremely bland grey colour palette. This is also the case when it comes to the original score by Trent Reznor and Atticus Ross, coming off as nothing more than your standard score for any modern-horror/thriller with a slight technological twist, which is very surprising, considering these composers did excellent work on the soundtrack for: ‘The Social Network’ back in 2010.

Although the novel obviously came out before last year’s ‘A Quiet Place’, I also couldn’t help but notice many similarities between the two films. Such as the lack of a certain sense, the apocalyptic setting, a theme of family and the eerie atmosphere/tone (despite the idea of the monsters making you kill yourself being very original). I also couldn’t help but feel the film never made enough use of its concept of simply witnessing the creatures drives characters to suicide, as this is a terrifying idea, and could’ve provided some very gory and truly shocking moments.

‘Bird Box’ is one of those few films that gets a large amount of attention for reasons I’m not entirely sure of, as personally, I thought the film was nothing but bland and forgettable in many aspects. Aside from perhaps the main performance by Sandra Bullock and the original idea of its story. There wasn’t much I enjoyed about this adaption, ‘Bird Box’ gets a 3/10 from me. Give it a watch if you’re really interested, but personally, I feel there are many similar films which explore this idea with a much better execution. 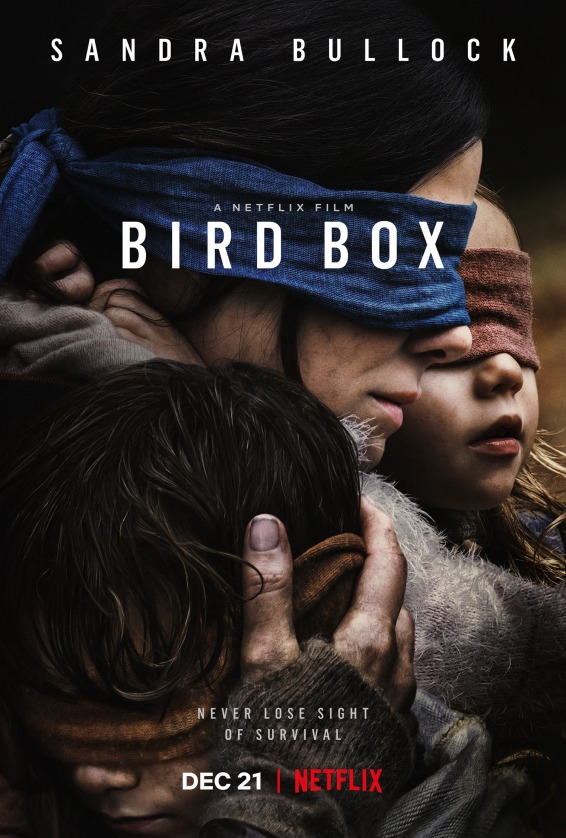