Considering the monumental impact of the original, Texas Chainsaw Massacre in the annals of horror cinema, it’s peculiar that the film’s ensuing franchise has had such an erratic history, bouncing from excessively jokey entries like The Texas Chainsaw Massacre 2 in 1986, to absolutely bonkers ones such as Texas Chainsaw: The Next Generation in 1995. 2017’s Leatherface continues this trend by once again attempting something different; aiming to be a prequel that explores the origins of the face-wearing menace himself. Unfortunately, however, even though the film has good intentions, Leatherface only succeeds in replicating the skin of a Texas Chainsaw Massacre flick and non of the guts within as the journey its titular character embarks upon ultimately doesn’t feel worth the eighty-seven-minute runtime.

Plot Summary: In 1955, the young, Jedediah Sawyer, is assigned the task of luring an unsuspecting traveller into his family’s decrepit barn for the sake of blood. But when it turns out that this unfortunate victim was actually the lone daughter of Texas ranger, Hal Hartman, Jedediah is forcibly separated from his family and placed in a mental institution. Ten years later, the now near-adult, Jedediah, along with a handful of criminally insane inmates, manage to escape the asylum during a riot, beginning a journey of murder and turmoil as the group trudge across rural Texas evading the vengeful ranger pursuing them…

Directed by Alexandre Bustillo and Julien Maury (Inside, Among the Living, The Deep House). Leatherface is, for all its flaws, at least an earnest attempt at franchise course correction, avoiding another reboot of the series to instead tell a story that tries to connect a few dots in the very tangled web of this horror franchise. Needless to say, being a prequel, Leatherface still suffers from the usual problem most prequels do: explaining things that don’t need explanation. As in the original film, Leatherface stands out because he is a complete enigma even in a family of cannibalistic lunatics. We never receive answers to any of the questions we have about him as Leatherface simply exists, which is what makes him so terrifying. So, naturally, exploring his backstory diminishes that aspect. Furthermore, with Leatherface being just one member of a homicidal family, a prequel would be a great opportunity to develop some of the lesser-explored members of the Sawyer family such as the Proprietor, the Hitchhiker and Grandpa Sawyer, yet none of their backstories are even hinted at.

Despite their frequently flat dialogue, the film’s main cast of Sam Strike, Vanessa Grasse, Sam Coleman Jessica Madsen, James Bloor and Stephen Dorff all throw themselves into their respective characters with confidence as once Jedediah finds himself inside the mental institution, he encounters several intriguing patients. From the silent brute, Bud, to the callous couple, Ike and Clarice, all of whom make members of the Sawyer family look sane by comparison. Then there is the idealistic nurse, Lizzy, who essentially serves as the story’s final girl, yet due to a severe lack of development similar to many of the other characters, it does become increasingly difficult to empathise with her outside of just acknowledging her horrific situation. However, the highlight of the cast is undoubtedly Lili Taylor as Verna Sawyer, the family matriarch who is bursting with pride for her boys, but devoted to the point where every outsider is seen as an adversary.

When it comes to the visuals, even though Leatherface wasn’t actually shot in America, but instead in Bulgaria for budgetary reasons. The film does utilise its varied colour palette along with natural lighting to create an effective and convincing backdrop of back-country Texas, giving cinematographer, Antoine Sanier, plenty of opportunities to integrate creative shots, including a shot that references the extreme low-angle dolly shot from the original film.

Regrettably, the original score by John Frizzell isn’t quite as remarkable as the soundtrack rarely breaks the mould of a typical horror soundscape, being rather forgettable outside of the score’s occasional use of a chainsaw-like rumble. Numerous songs from the 1960s can also be heard throughout the film such as Leave Me Alone, Working on the Line and Don’t Take Me for Granted, which help further ground the story in the ’60s time period alongside the lavish costume and production design.

On another note, for those who desire graphic violence, there is a commendable amount of gore in Leatherface even if the film is more plot-driven than kill-driven. Still, I will always prefer minimal gore over a constant bombardment of blood when it comes to The Texas Chainsaw Massacre franchise as whilst no sequel, prequel or spin-off will ever be able to recapture the ominous tone and documentary-like feel of the 1974 classic, having minimal violence does at least make any later entry in the series seem closer to the original’s deceptive absence of on-screen brutality.

In summary, Leatherface is repulsive and disturbing much like the original film. The only difference is that The Texas Chainsaw Massacre also relied on intrigue and an eerie atmosphere to back up many of its horrifying concepts, whereas Leatherface does not. And while the film does admittedly deserve some credit for doing something different with the franchise, being the eighth instalment in this ongoing series, it’s apparent that Leatherface and his chainsaw slayings are starting to wear thin, becoming less and less enthralling each time they return to the silver screen. Rating: high 3/10.

Serving as both a prequel to Michael Bay’s iconic ‘Transformers’ franchise as well as a kind of soft-reboot for the film series as a whole, ‘Bumblebee’ is a fresh take on the sci-fi/action film series. But going-off the back of its outstanding reviews and director Travis Scott’s other film: ‘Kubo and the Two Strings’ on my initial watch, I was expecting a little more.

Plot Summary: On the run from his alien home-world of: ‘Cybertron’ in 1987, ‘Bumblebee’ manages to find refuge through a junkyard in a small Californian beach town. Where ‘Charlie,’ on the edge of turning eighteen and trying to find her place in the world, discovers him, battle-scarred and broken.

Whilst the film is definitely an improvement over Michael Bay’s other various attempts at the shape-shifting machines, ‘Bumblebee’ isn’t overall anything outstanding. Mostly been a very comedic sci-fi action-adventure with a few emotional moments thrown in. This version almost seems to be leaning more towards the iconic cartoon series from 1984 to 1987, as many of the ‘Transformer’s designs are ripped straight from the beloved TV show, even featuring a few cameos from classic characters.

Hailee Steinfeld and Jorge Lendeborg Jr. both portray young characters who attempt to help ‘Bumblebee’ finish his mission throughout the film, and while their characters: ‘Charlie’ and ‘Memo’ only really get a basic amount of development. They are likeable and serve their purpose within the story. A member of the cast I wasn’t aware of at first however, was the infamous John Cena. Who actually portrays one of the main antagonists of the film, aside from the ‘Decepticons’ themselves, and despite his mostly decent performance throughout the film, I simply just couldn’t take seriously. Mostly due to his ‘meme’ status and internet reputation.

Luckily the colourful visuals throughout the film definitely add to the cinematography by Enrique Chediak, as although the cinematography isn’t bad by any means, the cinematography is mostly generic for an action flick like this. But due to the great lighting and colour palette, ‘Bumblebee’ is easily the most visually appealing entry in the blockbuster franchise, ditching the ugly Michael Bay blue and orange colour palette in exchange for more of a summer-like feel for nearly the entirety of its runtime.

The original score by Dario Marianelli is your generic score for an action flick, with some heroic tones alongside it. The soundtrack isn’t really anything memorable, and despite also not being anything amazing, I think I still prefer the original score for the 2007 ‘Transformers’ film by Steve Jablonsky, which has since gone down in film as the main theme for the ‘Transformers.’

The action throughout the film is fun for the most part, not simply being another constant barrage of explosions and actually trying to utilize the various ‘Transformers’ abilities in different ways. However, it still doesn’t quite reach the level of fun the original cartoon series had, always feeling a little toned down. One compliment I can give the film however, is the comedy. As again whilst not landing every joke, the film does have it’s fair share of funny moments, which did give me a short chuckle at times, and not simply just a sigh or a cringe as many of Michael Bay’s extremely poor attempts at humour did.

It’s definitely a pleasant surprise to have an entry in the ‘Transformers’ franchise that isn’t just explosions and loud noises from start-to-finish, with a great visual appeal and plenty of humour throughout, I could see most having a lot of fun with this film, especially families. However, it might be that I simply don’t have a huge love for these characters, but I although I found it enjoyable whilst watching, it wasn’t super memorable for me personally. Final Rating: 6/10. 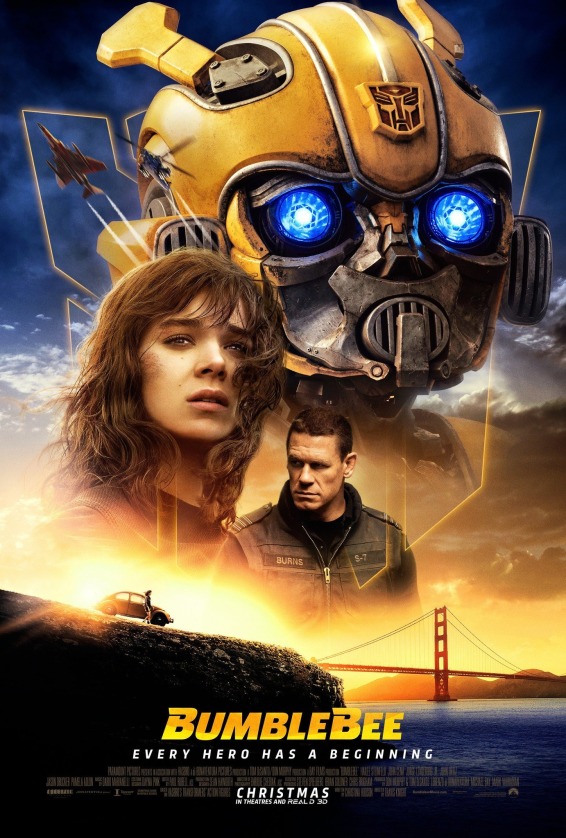