As much a science fiction as it is a horror, Dark Skies, released in 2013, has a solid cast, a fascinating premise and some admirable ambitions, attempting to break away from the familiar tropes of alien abduction stories in favour of delivering its own take on the common phobia of extraterrestrials discreetly arriving on Earth. Unfortunately, however, writer and director Scott Stewart (Legion, Priest, Holidays – Segment: Christmas) doesn’t seem to know how to utilise any of these elements, and as such, Dark Skies ends up being an extremely underwhelming film in more ways than one, even if it is a slight improvement over Blumhouse Productions’ usual jump-scare-filled endeavours.

Plot Summary: Suffering from financial troubles and the slow decline of their marriage, middle-aged couple, Lacy and Daniel Barrett, soon find their suburban life even further disrupted when an escalating series of unexplainable events leads them to discover that a terrifying force is monitoring them, a force which may have arrived from beyond the stars…

Originally pitched as a found-footage film with a screenplay written in only six weeks. Dark Skies curiously borrows more from supernatural horrors than it does from other extraterrestrial stories like Signs, Skinwalker Ranch and Close Encounters of the Third Kind as the film somewhat follows the structure of a conventional haunted house/possessed child storyline. And, as a result, suffers from many of the same issues that those films do. Appearing overly formulaic and frequently missing the opportunity to shift into full-on genre mode by the time its final act arrives. Furthermore, this structure results in many of the daytime sequences feeling quite tiresome as almost all of the extraterrestrial-related events don’t transpire until nightfall, leaving the daytime scenes to solely be used for kindred drama than foreboding moments of sci-fi dread.

The central cast of Keri Russell, Josh Hamilton, Dakota Goyo, Kadan Rockett and J.K. Simmons all do a serviceable job throughout the film, portraying members of a family that is slowly growing apart as time goes on. A situation that is only made more difficult by the family’s mounting bills and Daniel’s numerous attempts to find a replacement job falling flat at every turn. And whilst all of this is interesting for a family-centred plot, the problem here is that outside of the family’s general struggles, all of the characters are given very little development, an issue that is only exacerbated by the film’s many altering subplots, which cover everything from Lacy and Daniel’s declining sex life to their teenage son’s developing hormones and subsequent teenage crush.

Moving onto the visuals, with the exception of a couple of bewitching shots, the film’s cinematography by David Boyd is rather bland, primarily relying on hand-held mid-shots and close-ups. The film also continuously employs dim lighting for the majority of its runtime, meaning that nearly every shot at night is almost pitch-black with only a few small beams of moonlight to illuminate each room in the family’s house. Additionally, the film’s setting is, again, rather bland. As even though the location of a pleasant, everyday American suburb was chosen by Scott Stewart to help ground the story in reality, the setting itself is exceedingly dull, particularly for the horror genre.

Luckily, the original score fares a little better as composer, Joseph Bishara, best known for his fear-evoking score on 2010’s Insidious, once again uses his musical skills to craft a chilling soundtrack stocked with eerie futuristic noises and unsettling sound cues most present in the tracks: Two Posibitlies, Night Ride, Not in Control and The Disturbances. Showcasing the true terror that these extraterrestrials are capable of purely through a distorted soundscape.

When it comes to the concept of creatures from another world studying our planet, it isn’t often that this idea drifts into the realm of horror, especially with the cliché image of a small, grey-skinned alien with an oversized head and black eyes, commonly referred to as a Gray, being any but frightening. However, in Dark Skies, the Grays are genuinely unnerving beings, appearing as lanky, shadow-like figures that tower over the Barrett family. In addition to the Grays, the film establishes two other extraterrestrial races known as the Reptilians and the Insectoids. Interestingly, all three of these races are actually based on real-life abduction reports where abductees described their encounters, with Reptilians being described as green-skinned humanoids with attributes of reptiles such as hairless scaled-skin, concave-vertical pupils and the ability to shapeshift, changing from reptilian to human at will, while Insectoids are described as large beings with a close resemblance to grasshoppers/praying mantises. Playing into the various conspiracies that surround life on other planets.

In summary, whilst Dark Skies doesn’t earn many points for originality. When the film manages to tap into more low-level, relatable anxieties with its family-focused story, it does come far closer to getting under its audience’s skin than your typical horror film ghost or ghoul. Having said that, Dark Skies also repeatedly devalues the effectiveness of the alien abduction subgenre with its uninspired visuals and fairly predictable plot. And while I do consider Scott Stewart to be a talented writer and director with the right project, his films occasionally do leave something to be desired, Dark Skies simply being another example. Rating: low 5/10. 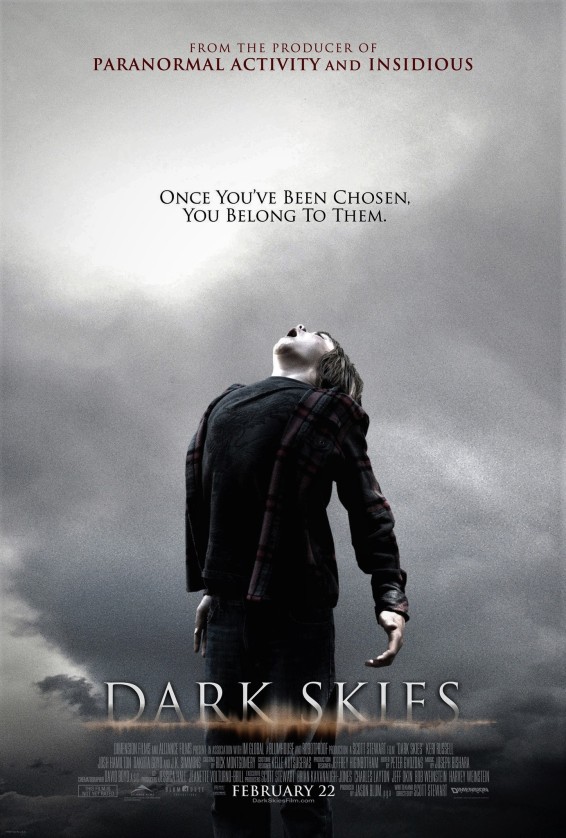