Despite being very unusual and even somewhat disturbing throughout, legendary director Stanley Kubrick (2001: A Space Odyssey, The Shining, Full Metal Jacket) brings to life one of the best films of his career. As ‘A Clockwork Orange’ explores an original story with some impressive cinematography and set-design, all leading the film to become very iconic and memorable within its own right. Even surpassing the novel it’s originally based on by Anthony Burgess, even with Kubrick crafting easily his most faithful adaptation to date when it comes to his filmography.

Plot Summary: In the near future, a young sadistic gang leader (Alex) is imprisoned after a violent event goes public, forcing him to serve time. But with the promise of an early release, ‘Alex’ is eventually lead to volunteer for a conduct-aversion experiment, which doesn’t go as he anticipated…

Although the narrative throughout ‘A Clockwork Orange’ never fails to be engaging, usually focusing heavily on dark themes of insanity, violence and morals. I do feel the film could definitely be seen as too intense for some viewers, as although the large amount of nudity and torture does serve the film’s story, it could also be seen as tasteless for some, regardless of the film’s overall lack of blood and gore during many of the violent scenes.

Ignoring the unbelievable performance from Malcolm McDowell as the psychotic protagonist: ‘Alex,’ Warren Clarke, Aubrey Morris, James Marcus, Michael Bates and Carl Duering are all excellent in their respective roles, despite their very limited screen-time and development, and although the over-the-top British accents many of the characters have may put some viewers off, I do feel it fits well within the interesting sci-fi world the film sets-up. However, we do get another appearance near the end of the film from a character known as: ‘Mr. Alexander,’ portrayed by the late Patrick Magee. Who despite being an important character within the plot, gives a performance a little too ridiculous in my opinion, as his facial expressions end-up coming off as more comedic than emotional during his dramatic scene nearing the end of the runtime.

The cinematography by the late John Alcott definitely adds another level to the film, as the enormous amount of movement and uncomfortable close-ups throughout the film really add to the story itself, including the now-iconic: ‘Kubrick Stare,’ which can be seen in many of his films. In addition to the fantastic cinematography however, is also the brilliant editing, which perfectly fits the film’s style, almost as if ‘Alex’ himself is taking the audience through the story within his erratic mind. This also links back to his narration, which is present throughout the film and is brimming with plenty of well-written and memorable dialogue.

The original score by Wendy Carlos is another element of the film I really enjoy, utilising an electronic soundtrack to further push the weird tone of the film, as the score recreates many of: ‘Alex’s favourite classic songs in an interesting way, resulting in a soundtrack that’s both memorable and unique. The film also uses a variety of iconic songs very effectively, perfectly capturing the insanity within the main group of misfits. One of the most memorable moments of the film even comes from this, as ‘Alex’ brutally beats a couple whilst singing the classic song: ‘Singin’ in the Rain.’

As previously mentioned, ‘A Clockwork Orange’ is also one of the few films where the sets are incredibly iconic by themselves, as each location the characters visit is always colourful and visually appealing. From the ‘Korova Milk Bar’ through to the London apartment ‘Alex’ and his parents call home, every set has plenty of 1970s style mixed-in with some science fiction aspects (this also applies to the many wonderful costumes on display throughout the film). There were also a number of interesting scenes that were left on the cutting-room floor, including more scenes set within the ‘Korova Milk Bar’ among plenty of other scenes focusing on the characters committing more horrible acts.

In short, ‘A Clockwork Orange’ is an extremely bizarre yet incredible experience, as the film is just as interesting to discuss as it is to watch among many film fans. Containing plenty of hidden messages and underlining themes alongside its phenomenal filmmaking and brilliant story, I feel the film is truly one of Kubrick’s best, despite not beating-out my personal favourite: ‘The Shining.’ So although ‘A Clockwork Orange isn’t without its flaws, I would still highly recommend this one for anyone seeking something a little more out-there, and of course, also due to its huge impact on pop-culture and the film industry alike. Final Rating: high 8/10. 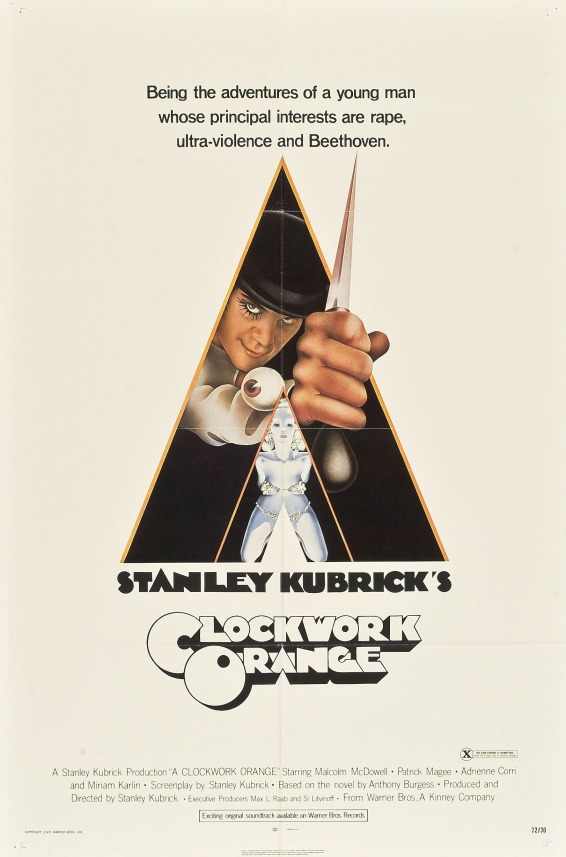