An intense thriller with elements of dark comedy thrown-in for good measure, ‘The Belko Experiment’ is written by ‘Guardians of the Galaxy’ and ‘Slither’ director James Gunn, and directed by Greg McLean (Wolf Creek, Rogue, Jungle). A strange combination which works surprisingly well in my opinion, as it results in a tense, unique and fast-paced horror/thriller.

Plot Summary: In a twisted social experiment, eighty American employees are locked in their high-rise corporate office building in Bogotá, Colombia, and ordered by an unknown voice coming from the company’s intercom system to participate in a deadly game of kill or be killed. Throwing every employee into a state of panic and a question of morals…

As you can probably guess from a quick pitch of the plot, the film doesn’t hold back from throwing the audience straight into the gory chaos after only about ten to fifteen minutes of screen-time. From here, the film continues to build tension and a dreading atmosphere throughout the remainder of the film. At many points ‘The Belko Experiment’ also dips its toes into the realm of dark comedy, not too surprising as writer James Gunn was originally set to direct as well. However, when it was time to begin filming, Gunn withdrew, deciding he didn’t want to spend several months working on such a violent film, leaving Greg McLean to bring his screenplay to the big screen.

John Gallagher Jr and Adria Arjona are the main two protagonists of the film, as well as Tony Goldwyn and John C. McGinley as the antagonists. Who are all great in their varied roles, due to there being an entire building worth of employees involved in the main story however, there’s an enormous amount of characters, which of course means barley any of characterisation for most of them aside from a couple of lines or the occasional scene.

Whilst the cinematography by Luis David Sansans isn’t any overly impressive, it is decently pleasing throughout the runtime and does manage to show off many of the practical gore effects within the film to their best extent. The same can not be said for the CG effects throughout the film however, as despite not always being noticeable, there are a few moments where the CGI becomes extremely obvious due to the film’s smaller budget and can take the viewer out of the film for a moment or two. In addition to this, the original score by Tyler Bates is not very memorable or unique despite doing a decent job of building tension throughout the film, as the soundtrack rises and changes over-time to fit the more tense and chaotic feel of the narrative. However, the score can also feel a little out-of-place when some of the more comedic scenes come into play, but this issue is also noticeable when it comes to the tone of the film, as despite much of the comedy actually working fairly well, the film sometimes changes from horrific imagery to humour a little too quickly.

One of the main elements of the film is obviously the gory deaths, as the story resolves pretty much completely around the deaths of the various characters, and while the film does have a few memorable moments and kills. I was a little dissatisfied with the variety, as the majority of the characters seem to die simply from gunshots, rather than the film getting creative and making better use of the office location it’s set-in, perhaps by having characters use office/everyday equipment and supplies as improvised weapons.

As you may also expect with a violent set-up such as this one, ‘The Belko Experiment’ also delivers on plenty of underlining themes and messages. Focusing mostly on how we react as humans to traumatic events and give-in to our most primal instincts and selfish desires, and while I do wish these ideas were delved into a little further. They are present throughout the film regardless, and I did find the way the film explored the ideas of human survival pretty interesting. Even my personal favourite scene within the film (which takes-place in the main reception of the building) excels at expressing these themes in pretty a brutal way.

So if all you’re searching for on your Saturday night is a bit of gory, comedic excitement with a few underlining themes mixed-in good measure. Then ‘The Belko Experiment’ happily delivers, as the film is an enjoyable thrill-ride with some quick-pacing and practical gore effects, regardless of some of its weak characters, CG effects and relatively simplistic story. Although it may not appeal to all, for me, I feel it’s a decent viewing experience. Final Rating: 7/10. 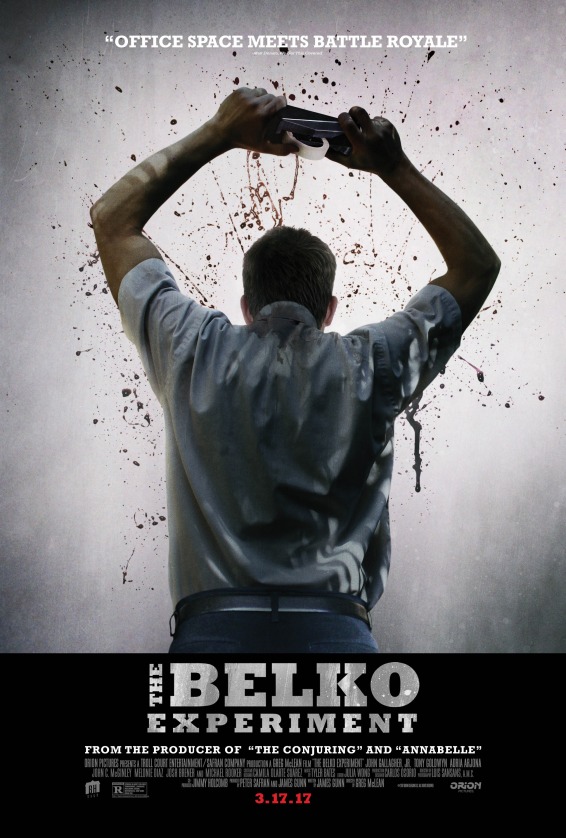