An excellent throwback to 1980s sci-fi and horror, ‘The Void,’ released in 2016 and directed by duo Jeremy Gillespie and Steven Kostanski, first began its life as a simple idea with two passionate minds behind it. As this surprisingly crowdfunded project makes remarkable use out of its thin-budget especially when considering the film’s many potentially expensive set-pieces, displaying its huge array of fantastic creature designs and effects, colourful lighting, and creative cinematography with enough confidence and innovation to keep any genre enthusiast enthralled.

Plot Summary: After ‘Sheriff Deputy Carter’ stumbles across a blood-soaked man limping down a deserted road, he quickly rushes him to a local hospital with a barebones, night shift staff. But when a series of strange events occur within the hospital, seemingly linked to a group of cloaked figures standing just outside the building, ‘Carter’ decides to lead a mission into the hospital’s basement to find an exit, only to discover something far more concerning…

Even though ‘The Void’ did have a handful of producers on-board more familiar with the horror genre, as mentioned previously, the film was primarily a crowdfunded project, earning most of its budget in addition to a limited theatrical release in 2017 as a result of its online community of donators and fans. And its not exactly difficult to understand why many fanatics of sci-fi and horror alike were so interested in supporting the film, as immediately from the stylised intro any fan of 1980s cinema can tell ‘The Void’ is truly a love letter to everything 80s, with the film’s narrative clearly taking heavy inspiration from classics like ‘The Beyond,’ ‘Night if the Living Dead,’ ‘Re-Animator,’ and, of course, pretty much all of John Carpenter’s filmography. Yet despite all of these influences, ‘The Void’ also manages to never feel overly derivative, even with the film’s plot sharing many similarities to the cult horror: ‘Prince of Darkness’ from 1987.

The cast of: ‘The Void’ is primarily comprised of unknown actors, which is by no means a bad thing, as the cast give solid performances across the board even in spite of their fairly one-note characters, with Aaron Poole, Kathleen Munroe, Daniel Fathers, Mik Byskov, Evan Stern and Ellen Wong portraying the main group of staff and survivors trapped within the hospital’s walls quite well. But the real stand-out of the film has to be Kenneth Welsh as ‘Dr. Richard Powell,’ easily the compelling character of the story who undergoes some enormous changes over the course of the runtime.

Samy Inayeh handles the film’s cinematography and handles it well, as whilst there are plenty of moments where the camerawork is far too reliant on hand-held shots, the film manages to even itself out over time with plenty of visually appealing ones. However, it’s the lighting and colour palette that are certainly the most visually impressive elements of the film, as ‘The Void’ jumps from harsh reds to cold blues almost from scene-to-scene, not only to add to the film’s unearthly atmosphere of dread, but also to help hide some of the film’s budgetary shortcomings. Furthermore, the story’s signature location of an empty hospital is a very distinct setting for a horror such as this, as the building seemingly becomes more unnatural and dilapidated the further the characters explore it.

For its original score ‘The Void’ actually had quite a large group of composers (five in total), who expertly crafted a classic 1980s synth score with undertones of dark horror, which greatly adds to both the film’s style and atmosphere. And although the film’s soundtrack is usually more atmospheric than cinematic, tracks such as: ‘Starless Night’ and ‘A Hole in the World’ prove the score does have some memorability amongst its many foreboding tracks.

Partly due to the film’s budget and partly due to Gillespie and Kostanski wanting to use as little CGI as possible, ‘The Void’ is a science fiction flick that delights in its practical effects. Ensuring every creature design and the costumes and/or prosthetics that bring them to life are nothing but flawless, from their skin to their teeth to their various tentacles (of which the film seems to relish in), nearly every aspect of each creature looks truly spectacular, and its these otherworldly designs alongside the film’s over-the-top gore and buckets of blood that help create some genuinely disturbing moments.

All in all, I feel ‘The Void’ succeeds in being an enjoyable throwback to many people’s favourite decade for sci-fi and horror, with its astounding filmmaking and many impressive practical effects all resulting in plenty of thrills and chills. And although some may argue the film lacks much in the way of originality, I’d argue otherwise. As I feel ‘The Void’ is less of a capsule for nostalgia and references for all things 80s, and more of a tribute to what came before it, never quite matching-up to many of the films from the time-period its referencing, but still raising the bar for indie filmmaking and crowdfunded projects in its best moments. Final Rating: high 7/10. 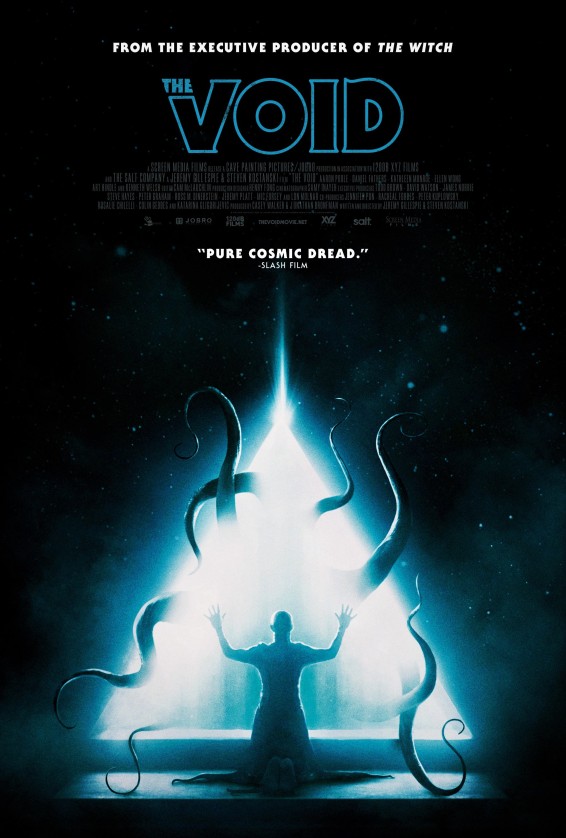 What’s wrong with the majority of modern horror films?

In my opinion, there are many different issues that modern horrors/thrillers suffer from now-a-days, although there are a few films that manage to avoid these problems, such as: ‘It Follows,’ ‘The Descent,’ ‘A Quiet Place,’ ‘Don’t Breathe’ and ‘The Void’ to name a few. The majority of modern horrors follow a very similar formula, a group of stereotypical teenagers do something they shouldn’t e.g. find a certain object (an Ouija board, a cursed book or dead friend/relative’s photo). Or a family moves into a new home only for it to be haunted by ghosts/spirits. These two plot-lines are the go-to for most of the new horror releases, despite being unbelievably drawn-out by this point.

Similar to how nearly every horror plot of the 1980s involved a group of teenagers visiting a cabin deep in the woods only to get slaughtered one-by-one at the hands of a psychotic serial killer. Sticking to stories that we have become so familiar to means that there is little surprise left for the audience, and the narrative soon becomes very predictable. Another issue with the majority of the stories that are told is the weak characters, nearly every modern horror has such bland characters it’s difficult to get invested in the story at all. Just because these characters may be killed-off doesn’t mean you don’t have to write for them, having some likeable or interesting characters actually makes the audience care whether they live or die, therefore increasing the film’s tension. Of course, hiring unknown actors who aren’t the most amazing at their craft also doesn’t help towards this issue.

Another thing that’s always bothered me in regards to the characters in most modern horrors, is the character’s extreme stupidity. The film actually falls less out of reality due to the characters being so unbelievably oblivious to everything around them. It’s understandable the characters would have some doubts the first time one of their friends die. But after two or three, it’s ridiculous the characters still haven’t figured out what the audience has half an hour ago. Even if their curious but not concerned, it’s nothing but frustrating and less-believable. This unbelievability also applies to the attractiveness of the cast, as although I think a film featuring a few attractive cast members is perfectly fine, casting nothing but models takes the audience straight-out of the story. A film particularly guilty of both of these things is the Blumhouse production: ‘Truth or Dare.’ As this film is a perfect example of the problems I have with most modern horrors, both in regards to their characters, actors and scripts.

However, it isn’t just the script or actors that’s an issue when it comes to modern horrors, the overall filmmaking of the picture is usually extremely bland. Again, due to the genre, some people may believe the filmmaking isn’t important. This isn’t true. The filmmaking can still be impressive while building tension and fear. ‘It Follows’ is a great example of this, the beautiful lighting, cinematography and original score all give the film style without taking anything away from the eerie atmosphere. Horror soundtracks are a huge issue for me when it comes to most of the films, as it is possible to create a great memorable score without making it just sound eerie e.g. ‘Halloween’ or ‘The Shining.’

Finally, we get to the biggest problem with modern horror, the classic jump-scare. Jump-scares only really came around in the early 2000s, but since then they have completely invaded the film industry. Not only appearing in horror but everything from action to sci-fi to even superhero films, they’ve now become almost a staple of modern filmmaking. I don’t believe they are an entirely awful idea, they can be used correctly every so often to shock the viewer, and give them a quick rush before the next scene. However, most modern horrors now essentially rely on jump-scares (most James Wan films being particularly guilty of this in my opinion), and I believe this is incredibly lazy. Horror should be about creating an eerie atmosphere, having creepy visuals and giving the audience some likeable characters to fear for. Almost placing the audience in that situation themselves, ‘Pyewacket’ from 2016 being a great example of this. Drawing out shots and using dark lighting/shadows and silhouettes etc. can all help build fear in the audience. Rather than just throwing ‘scary’ faces at the screen alongside loud noises to see what sticks.

The main reason all these bad decisions are made when it comes to the horror/thriller genre is mostly due to money, no matter how awful the majority of these horrors are, the reality is that they make money. As these films can be made on a very small budget as they utilise mostly unknown actors and very little CGI or make-up effects, with a target audience consisting of teenagers or horror fanatics who will pay to see the film, no matter how terrible the trailers may look. For example, the first ‘Paranormal Activity’ had a budget of only £11,800 and grossed over £151 million. The film only having an hour and twenty-minute runtime along with very few ‘ghosts’ even being displayed on-screen. ‘The Bye Bye Man’ also being another example. Having a small budget of £6 million with a gross of £21 million. Despite awful reviews from both critics and audiences alike.

In conclusion, modern horror films are suffering due to both a lack of creativity and a heavy focus on profit. I’m of course aware that film is a business, but in my opinion, creativity is the most important aspect, as without creativity film doesn’t exist. Horror is a fantastic genre that isn’t reaching it’s full potential a majority of the time due to production companies/directors not caring. There’s a reason a lot of indie horrors are praised, as they don’t set out to only make money, many of them are extremely creative and make amazing use of their micro-budgets. Although horror also wasn’t perfect in the past, I definitely preferred it. At least back in the 80s/90s we still had some creative concepts, from killer’s invading their victim’s dreams to murderous children’s dolls to even a hand-held documentary on teenagers finding an ancient evil witch in a forest. The possibilities were (and still are) truly endless. Hopefully soon, filmmakers and producers alike will look past the profit and truly see this.