A hilariously awful attempt at horror, ‘Wish Upon’ comes to us from director John R. Leonetti. Mostly known for his cinematography on the first two ‘Insidious’ films as well as the first entry in ‘The Conjuring’ series. With him now recently delving his hand into directing, working on films such as: ‘Annabelle,’ ‘The Silence’ and obviously ‘Wish Upon.’ However, after watching all of these films, I think I would really rather he just stick to cinematography from now on.

Plot Summary: When a teenage girl (Clare Shannon) discovers an old music box that carries strange abilities and can grant her any wish she desires, she believes all her dreams have come true. That is until, she realises that there is a deadly price for each one…

Although the film’s plot does take inspiration from W.W. Jacobs’ iconic short story: ‘The Monkey Paw,’ ‘Wish Upon’ itself rarely feels like an actual horror film. Of course, the fact that the film has little-to-no atmosphere as well as an enormous amount of weak jump-scares throughout, it’s very clear that this film was clearly meant to pander towards horror-loving teenagers. ‘Wish Upon’ is truly one of the least tense horrors I’ve watched in a very long time, even being unintentionally hilarious at various points.

This is also one of the few films where I can safely say that every character in the film is not only poorly portrayed, but also incredibly stupid. As the entire cast of Ki Hong Lee, Sydney Park, Shannon Purser and, of course, Joey King as the protagonist: ‘Clare Shannon.’ All make ridiculous decisions throughout the entire runtime, in addition to never really acting very intensely to anything, no matter what it may be. The writing also doesn’t help, however, as none of the characters in the film talk like actual teenagers, and the script is full of incredibly cringey, cliché and cheesy lines.

All of the cinematography throughout the film by Michael Galbraith is very bland and uninspired. Normally using just simple shots without any attempt to integrate any creepy elements into them. The lighting also doesn’t help, however, as most of the film looks like a cheaply made for TV film due to being very bright and clear throughout.

The original score by ‘tomandandy’ is your usual horror affair, with nothing really interesting or particularly memorable of note about it. However, the choice of songs throughout the film is memorable for all the wrong reasons, as the film chooses to use terrible pop music at various points during the film, which comes completely out of nowhere and ruins whatever little tension or atmosphere the film had up to that point, making the film feel almost like more of a teen comedy than a horror. Simply due to how distracting it is, this was easily the worst element of the film for me.

Only a very small detail, but I feel the only aspect of the film I actually enjoyed is the music box itself, having a very creepy and unique ancient Chinese design. It’s clear the filmmakers were trying hard to make the item iconic in its own right. Whilst obviously not truly successful with this, I still like its design, and the eerie tune that it plays as a horrific event unfolds, the film also has a very surreal and entertaining end title sequence, but this obviously adds very little to the film overall.

In conclusion, ‘Wish Upon’ is a true mess of a horror film, everything from the writing to the cinematography to the original score is either very poorly done or extremely dull and generic. Often coming across as unintentionally hilarious and lacking any truly terrifying scenes, ‘Wish Upon’ is far beyond saving. But, at the very least, the film does have plenty of memorable moments if you decided to watch it with some friends for a laugh. Final Rating: 1/10. 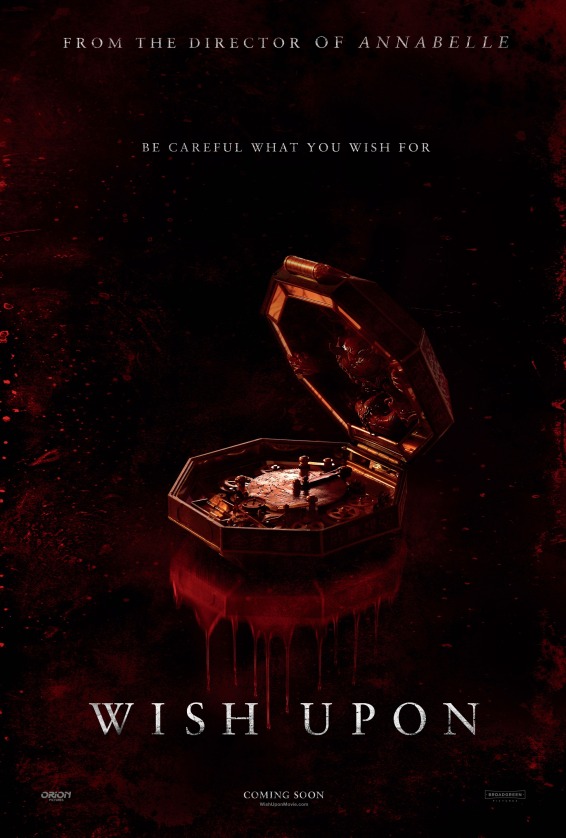