Nowadays, it’s common to hear complaints about the lack of originality in cinema, and when you’re staring-up at a marquee filled with countless sequels, prequels, spin-offs and reboots, it’s hard to argue otherwise. But that originality hasn’t gone away entirely; you just have to know where to look. Case in point: ‘Colossal’ from 2017. An unusual film that I can say with confidence isn’t for everyone, ‘Colossal’ is a charming comedy-drama from director Nacho Vigalondo (Time Crimes, V/H/S: Viral – Segment: Parallel Monsters, Pooka!) that combines some phenomenal performances from Anne Hathaway and Jason Sudeikis with a superb visual flair. All coming together to create a memorable and very amusing indie flick.

Plot Summary: ‘Gloria’ is an out-of-work party girl forced to leave her life in New York City and move back to her small home town. Whilst reports surface that a giant creature is destroying Seoul in South Korea, as she gradually comes to the realisation that she is somehow connected to this strange phenomenon…

Although the narrative of the film leans heavily on the mystery of how the monster and ‘Gloria’ are connected. An element of the writing I really enjoyed is that none of the characters are treated like a fool, it doesn’t take our protagonist long to figure out the truth nor does it take her long to convince other people of it. Every decision made by the characters is understandable and realistic within reason. Despite also being an unlikeable character for a large majority of the film, Anne Hathaway manages to keep her character interesting and likeable enough for the audience.

As previously mentioned, the performances here are outstanding, both from Anne Hathaway and Jason Sudeikis, and although he doesn’t appear much throughout the film Dan Stevens is also decent. All the cast have great comedic timing and genuinely excellent chemistry, and along with the film’s well-balanced tone can quickly change to very dramatic. Tim Blake Nelson and Austin Stowel also have small roles in the film, and despite also not having too much screen-time, they are very memorable as ‘Oscar’s close friends.

The cinematography by Eric Kress gives the film a nice visual appeal. Alongside the colour palette consisting mostly of dark blues, greens and purples. Alongside a few brighter blues and yellows. The film really just has a nice look overall, without being too colourful or obnoxious. Any scene containing the giant monster are obviously scenes which use large amounts of CGI, and despite not having a huge budget. Every one of these scenes is fantastic, truly showing-off the enormous scale of the creature and it’s trail of destruction to the fullest extent.

The weakest element of the film for me is the original score by Bear McCreary, although I usually enjoy this composer’s soundtracks. Creating such memorable scores such as: ’10 Cloverfield Lane’ and AMC’s ‘The Walking Dead’ (including the now-iconic opening theme). This score just feels somewhat lacking, while not particularly bad, the original score simply lacks any character or originality. Aside from sounding somewhat similar to a classic monster score at points similar to ‘Godzilla,’ for example.

Overall, ‘Colossal’ is the perfect comedy-drama, in my opinion, balancing great performances with an original story and some brilliantly executed emotional/funny scenes. The film is extremely enjoyable all the way through. The film keeps us a decent pace and doesn’t overstay it’s welcome, yet still leaves the audience satisfied. The film really just has a great personality to it, and is filled with plenty of memorable scenes throughout its tight runtime. So, I’d say definitely check this one out if it sounds like something you’d be interested in. Final Rating: 8/10. 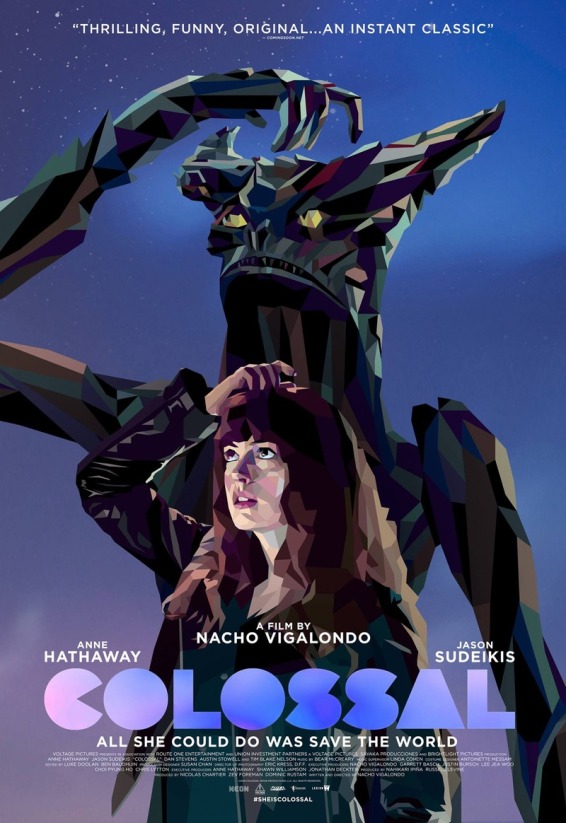