Disney’s first CG animated fairytale is both incredibly funny and heartwarming. As ‘Tangled’ brings to life the well-known fairy princess: ‘Rapunzel,’ now-updated for a new generation of children. Through some beautiful animation, wonderful original songs and an incredibly vibrant colour palette. ‘Tangled’ feels almost as if it’s an enchanting classic restored from Disney’s golden age of animation, despite its few small problems here and there.

Plot Summary: When the ‘Kingdom of Corona’s most-wanted and most charming bandit: ‘Flynn Rider’ hides-out in a mysterious tower, he’s taken hostage by ‘Rapunzel,’ a feisty tower-bound teen with magical golden hair. Eventually leading the two of them to strike a deal so ‘Rapunzel’ can achieve her long-desired dream of seeing the annual release of the kingdom’s lanterns…

Heavily praised since its release, ‘Tangled’ was created by Walt Disney Animation Studios, which have produced a variety of fantastic animated films in recent days. Releasing films such as: ‘Bolt,’ ‘Zootropolis,’ ‘Wreck-It Ralph’, ‘Moana’ and of course, the smash-hit: ‘Frozen’ in 2013. Many of which even beginning to surpass Disney’s other animation company over-time, this obviously being Pixar, who now seem to be far more focused on creating constant sequels, prequels and spin-offs rather than original stories.

Mandy Moore and Zachary Levi bounce extremely well-off each other as ‘Rapunzel’ and ‘Flynn Rider,’ with both the characters having plenty of amusing moments in addition to some surprisingly great chemistry (considering they are fully animated). The cast also features Donna Murphy as ‘Mother Gothel’ and Ron Perlman as one of the ‘Stabbington Brothers’ (a.k.a. The antagonists of the film), and although neither of these two villains ever become quite as memorable or as iconic as some other Disney antagonists. They do serve their roles within the story effectively and are intimidating enough. During the story, ‘Rapunzel’ also receives a character-arc, growing as a character to become more confident and independent as the runtime continues on, which I feel is not only executed well but also gets across an important message for children.

Featuring an array of stunning wide-shots, the animated cinematography throughout ‘Tangled’ is decent overall. While nothing overly imaginative, the animated cinematography works really well for many of the film’s fast-paced action sequences. The animated cinematography is also improved by the film’s incredibly colourful visuals, as many scenes throughout the film are dripping with bright colours and magnificent lighting. Some of the colouring of character’s clothing even reflect their personalities, as ‘Rapunzel’ wears purple, a colour often associated with royalty and ‘Flynn’ wears blue and white, colours that often stand for goodness. Whereas ‘Mother Gothel’ wears red, a colour that usually symbolises evil.

The original score by Alan Menken is certainly the weakest element of the film, as ignoring the actual songs within the film, most notably: ‘When Will My Life Begin’ and ‘I See the Light.’ The score is mostly generic and little bland at points when it comes to animated flicks, as I feel the soundtrack could’ve been greatly improved if the score would’ve embraced the more fantasy-esque aspects of its narrative. Occasionally, the film can also over-rely on musical cues, as during a number of scenes the film feels the need to accompany every action or piece of humour with a trumpet cue, which feels nothing but unnecessary throughout.

Being many years on from the film’s initial release, it’s inevitable that the film’s animation would begin to age. However, although a couple of the close-ups on character’s faces may look a little out-dated. ‘Tangled’s animation predominantly holds-up well since 2010. In particular, the CG effects on ‘Rapunzel’s long-hair, which still look marvellous even today. The film’s humour is also fairly excellent, as the film has a large amount of range when it comes to its jokes, usually having plenty of comedic moments that will appeal to older viewers as well as young children. ‘Tangled’ also gets some great comedic moments out of its horse character: ‘Maximus,’ who quickly ends-up becoming one of the film’s greatest characters through his constant drive to catch ‘Flynn Rider,’ with many of his movements being presented as if he is a large dog or even a human.

Although it may not be one of Disney’s best, ‘Tangled’ is still very enjoyable from start-to-finish. Despite its sometimes overly-fast-pacing and slightly dated animation. The film has more than enough to please families, with some likeable protagonists, plenty of memorable songs and an overall joyful and adventurous tone. ‘Tangled’ is in my opinion, on the higher-level of fantastical family films, and whilst some may feel the film is aimed more towards one gender with its story being based-around a fairy princess, I’d argue otherwise. Final Rating: 8/10. 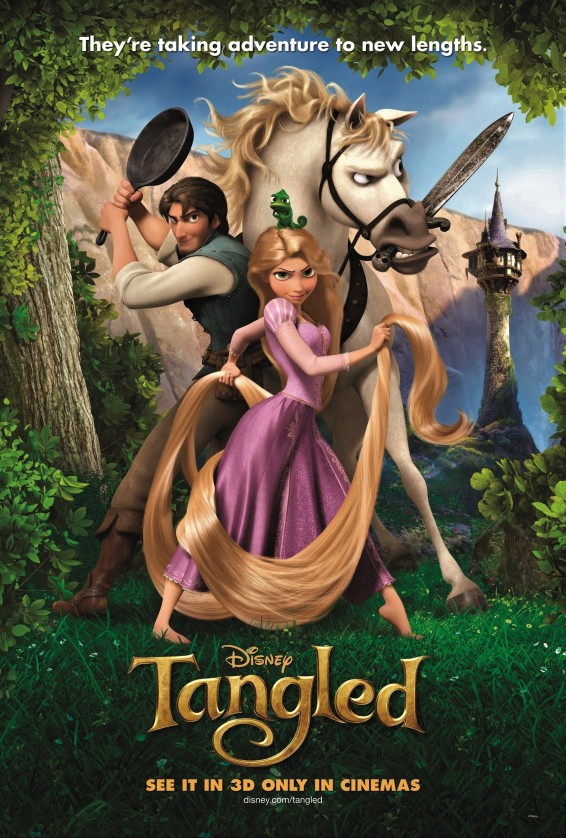