Written and directed by Damien Chazelle (La La Land, First Man). This indie drama appeared almost out of nowhere to incredible reviews from both critics and audiences alike in 2014, featuring some unbelievable performances from Miles Teller and J.K. Simmons alongside an engaging narrative and well-written script. ‘Whiplash’ truly raises the bar for quality when it comes to the independent film sector and small-budget filmmaking in general.

Plot Summary: A promising young drummer (Andrew) attending a prestigious music academy finds himself under the wing of the most respected professor the academy has to offer who has gained an infamous reputation over-time due to his constant abuse towards students who aren’t reaching their full potential.

Being shot in only nineteen days, ‘Whiplash’ feels a true passion project for director Damien Chazelle, with large portions of the film even being based-on Chazelle’s own experiences of being part of a band during his high school days. Despite this promising inspiration, to even receive funding for: ‘Whiplash’ Chazelle actually had to turn a small portion of the script into a short film, which he then submitted to numerous different short film festivals. In which, J.K. Simmons played the same character whilst Miles Teller’s character was originally known as ‘Johnny Simmons’ before later being changed.

Miles Teller (who has actually played the drums since he was fifteen) portrays the film’s protagonist: ‘Andrew’ very well. Presenting ‘Andrew’ as a likeable and talented drummer who soon becomes incredibly self-righteous as he begins to dismantle his own life after becoming more and more obsessed with trying to perfect his musical talent. However, its the criminally underrated J.K. Simmons who truly steals the film. Portraying ‘Andrew’s tutor: ‘Fletcher’ as a strict and sometimes even intimidating presence, usually resulting in ‘Andrew’ (as well as his many other students) being eager to impress him despite his constant ridiculing of them, a large amount of which the writing actually manages to make quite humourous without taking-away from the film’s drama. Melissa Benoist also makes a short appearance within the film as ‘Nicole’, a young girl who ‘Andrew’ has an affection for, yet despite her decent performance, ‘Nicole’ ends-up feeling very under-utilised due to her extremely short screen-time.

The cinematography by Sharone Meir is fairly solid throughout the film, while nothing overly extraordinary. The film’s various close-ups of the different drum kit pieces (as well as many other instruments) really gives the film an element of style, in addition to making for a number of memorable and visually pleasing shots. Alongside this is also the film’s colour palette, which mostly consists of dirty yellows and oranges, giving the film an almost rustic appeal, not too dissimilar to a drum kit cymbal itself.

Throughout the runtime, the original score by Justin Hurwitz is predominantly based around drums (obviously due to the story’s focus on-such) aside from a few tracks which utilize various trumpets and piano. Meaning all of the tracks feel very Jazz-like, which fits perfectly with the film as nearly every-song that is performed by ‘Andrew’ and his fellow band members is always within this genre of music. My personal favourite from this long list of impressive work is more than likely the signature track: ‘Overture’, simply due to the track’s enormous amount of range.

As previously mentioned, Miles Teller has played the drums since he was fifteen, and throughout the film, ‘Andrew’ receives numerous blisters on his hands due to his vigorous and unconventional style of jazz drumming. While most are aware of this, it may surprise some viewers to know that this style of drumming is Teller’s own. Meaning some of the blood that appears on his hands and drumsticks within the film’s more intense scenes is actually real. Despite this commitment however, ‘Whiplash’ still suffers from one major flaw, this being the film’s overly fast-pacing. As due to the film’s tight runtime, ‘Whiplash’ does sprint through its story without much hesitation. Although it doesn’t feel rushed per-say, the film’s fast-pacing does begin to make certain aspects of its story feel undeveloped as a result, e.g. ‘Andrew’s various relationships and his life outside of music.

‘Whiplash’ may be a low-budget indie flick, but through its marvellous performances, brilliant writing and attractive cinematography. Chazelle manages to craft a very entertaining film focused around music that isn’t simply an adaptation of a classic theatre performance. Whilst it may not feature the vibrant and varied colour palette of: ‘La La Land’ or the stunning CG visuals of: ‘First Man’, Damien Chazelle’s directorial debut is certainty an astounding effort and a memorable musical experience to say the least. Overall, very a well-deserved 8/10. 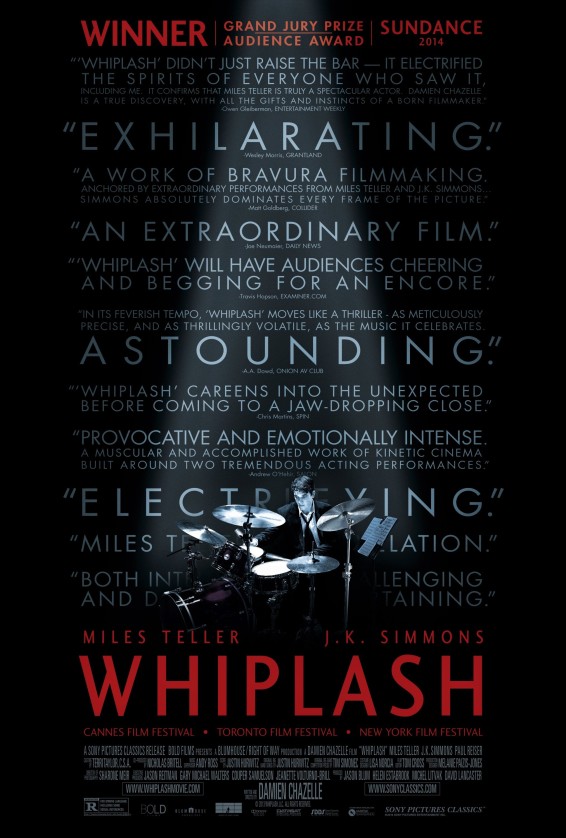