A fairly subdued but very effective thriller, ‘The Invitation’ released in 2015, builds-up an almost absurd amount of tension over the course of its ninety-nine-minute runtime, maintaining the intrigue within its plot whilst also constantly defying the viewer’s expectations. Although the film does eventually devolve into generic slasher territory for its final act, this indie thriller utilises its confined location and fantastic performances so effectively that it soon overcomes the majority of its flaws.

Plot Summary: After ‘Will’ and his girlfriend: ‘Kira’ accept a formal invitation to a dinner party in the Hollywood Hills hosted by his ex-wife: ‘Eden’ and her new husband, ‘Will’ begins to feel unsettled as his ex-wife seems overly-eager to reunite with friends she lost contact with over two-years ago. But as the dinner party continues, ‘Will’ is presented with mounting evidence that their hosts have a more sinister agenda…

Directed by Karyn Kusama (Girlfight, Jennifer’s Body, Destroyer), ‘The Invitation’ is a low-budget film in the best possible way, as the director and writers had complete creative control over the project due to it being produced without any involvement from major production companies. This is more than likely why the film lacks any unnecessary jump-scares or a forced cliffhanger ending to serve as sequel/prequel bait. Instead, the story has strong underlining themes of past trauma, as the protagonist: ‘Will’ along with his ex-wife: ‘Eden’ both share a dark past which looms over their present-day lives.

Logan Marshall-Green portrays ‘Will’ very well, as the excellent character-writing combined with Marshall-Green’s performance make ‘Will’ feel like not only a realistic character, but also somewhat of a stand-in for the audience themselves. As upon ‘Will’s arrival at the party, he immediately suspects that something is wrong, as he analyses the small yet strange details of their hosts. But obviously its also understandable as to why the other guests question or even just deny his claims, as his traumatic background makes him appear almost jealous that his ex-wife has moved on from their past in search of happiness. The rest of the cast of Tammy Blanchard, Emayatzy Corinealdi, John Carroll Lynch and Toby Huss (just to name a few), are all also stellar in their respective roles.

Everything from the film’s colour palette to its lighting to its cinematography by Bobby Shore, all visually-display the contrast between the story’s cozy setting and the tension and discomfort that is building throughout the narrative. As the film’s visuals are intentionally quite dim and warm in order to relate to the idea of the lavish house being a safe environment, when in reality, something far more ominous is at work, which in a way is also visually-represented through the darkness of the night creeping its way into the house via the windows. Additionally, the film’s huge amount of variety when it comes to its camerawork helps to make ‘The Invitation’ a more engrossing experience, as with the film mostly relying on its structure of every combination of characters slinking away into the next room for a conversation, it manages to avoid becoming tiresome as a result of its cinematography and score.

Speaking of the soundtrack, the original score by Theodore Shapiro goes a long way to accentuate the feeling of foreboding that the story protrudes, as the soundtrack only utilises solitary stringed instruments. This minimalist approach works perfectly, as the subtlety is reflective of both the story itself and the dimmed-down visuals, really driving a knife through the viewer through the simple use of a violin. The two tracks: ‘Into the Canyon’ and ‘I’m Actually Early’ are brilliant examples of this, but in all honesty, the score features so many wonderful tracks that its difficult to pick favourites.

Spoilers ahead in this section for those who wish to go in blind. But when its finally revealed that the goal of the dinner party is to murder all the guests present for the purpose of pleasing a malevolent cult, the film does lose much of its charm. As the short scene we see of the guests being shot one-by-one doesn’t feel like a truly rewarding payoff considering how long the build-up actually was. However, the film does still make an attempt to develop the cult, and it quickly becomes clear that the group share many similarities to real-world groups, with the two most obvious influences being: ‘Heaven’s Gate’ and of course, Charles Manson and ‘The Manson Family.’

To conclude, ‘The Invitation’ is quite the underappreciated gem, as the film makes great use of its thin budget to craft a slow-burning yet layered thriller. While there are a few minor plot threads left lingering, the film does give enough clues/hints for keen-eyed viewers to find, and aside from perhaps the lacklustre climax, I personally have very few gripes with ‘The Invitation,’ and I would recommend it to anyone in search of a tense and entrancing story with equally entrancing filmmaking. Final Rating: low 8/10. 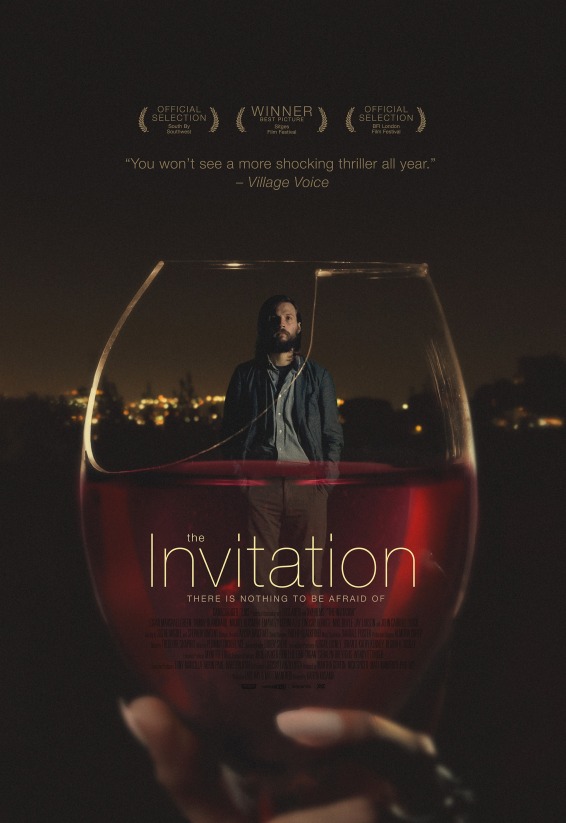