An unsettling indie horror firmly within the mould of the classic thriller: ‘The Collector’ from 1965, 2016’s ‘Pet’ takes what could potentially be nothing but an exploitative horror and twists it into a unique story that continuously indulges in defying its audience’s expectations. And although the film never manages to fully escape its various flaws by the end of its brief runtime, ‘Pet’ is able to achieve a nice balance between many of its best and worst aspects.

Plot Summary: After ‘Seth,’ a socially awkward recluse bumps into his old high-school crush: ‘Holly,’ he subsequently becomes obsessed with her just as he was many years ago, ultimately leading him to abduct her and hold her captive beneath the animal shelter where he spends his working days, enclosing her in a cage just as he does with the canines above…

Directed by Carles Torrens (Apartment 143) and written by Jeremy Salter, the writer partly responsible for the disastrous ‘Fantastic Four’ reboot in 2015. ‘Pet’ was considered an utter failure upon its initial release, with the film only earning a box-office gross of around £8,000 on a total budget of £15,800, in addition to receiving a series of extremely mixed reviews from both critics and audiences alike. While this may be due to many fearing ‘Pet’ would be nothing but a grotesque ‘Captive Woman’ flick, ‘Pet’ is actually much more interested in going against the typical clichés many viewers will associate with this idea to delve into the ever-shifting power-dynamic between ‘Seth’ and ‘Holly,’ making for a pretty engrossing and unpredictable watch even if a level of disbelief is surely required as a result of the film’s many, many plot twists.

Much of what makes ‘Pet’ work can be attributed to its two leads, with Dominic Monaghan being hugely effective as ‘Seth,’ portraying him as a soft-spoken introvert who simply meanders his way through life with a small apartment and boring job, looking anyone (or anything) that could make his life truly worth living. And whilst Monaghan is certainly capable of being intimidating when the story requires it, it is a shame that much of: ‘Seth’s transformation from a wholly-reclusive loner to a plotting unhinged stalker feels very rushed. Then, of course, there’s ‘Holly’ portrayed excellently by Ksenia Solo, who is far from your usual helpless victim alluded to almost immediately through Solo’s sly performance and the unhealthy relationship that grows between her and ‘Seth’ as the story continues on. However, ‘Pet’ sadly still features a weak link amongst its cast, as Jennette McCurdy’s performance as ‘Holly’s best friend: ‘Claire’ feels lacking in nearly every scene she’s in, despite her actual character serving a crucial role in the development of: ‘Holly’s character.

A large majority of the cinematography by Timothy A. Burton is visually interesting, but unfortunately, many of the film’s shots are spoilt due the over-reliance on hand-held camerawork, with a number of shots being accomplished through hand-held for seemingly no reason. Still, the cinematography is varied enough to stop the story’s limited number of locations from becoming monotonous, especially when placed alongside the film’s dramatic lighting and grimy set-design.

Similarly, the original score by Zacarías M. de la Riva is competent, yet many tracks do feel more suited to something like a modern crime thriller than a disturbing psychological horror such as this, feeling especially out-of-place during any scenes that feature graphic violence. Furthermore, there are also a number of moments where the film implements its soundtrack during scenes that I personally feel would’ve been far more effective should they have been completely silent or possibly placed more emphasis on sound design.

The main issue ‘Pet’ suffers from is the inconsistency of its writing, as although its many subversions of the horror genre immediately put it on a level higher than a large majority of modern horror flicks that entirely rely on obnoxiously loud jump-scares. Much of the film’s characterisation is ruined as a result of clunky dialogue, whether that’s due to the actual line itself or its delivery, which is unfortunate as many of the film’s extended dialogue scenes are where the story has the most to chew on, developing its characters and their motivations while simultaneously implementing its signature theme of taking advantage of the opposite sex, even if this underlining theme is fairly surface level.

In short, whilst ‘Pet’ undoubtedly has its strengths, many of them do feel undermined by its weaknesses. From Jennette McCurdy’s weak performance to the peculiar dialogue and continuous reliance on hand-held camerawork, ‘Pet’s constant tension building and subversion of classic horror tropes may not have been enough to draw in horror fans back in 2016, especially with the likes of: ‘Don’t Breathe,’ ‘Hush’ and ‘The Autopsy of Jane Doe’ all releasing around the same time. Still, while I understand why ‘Pet’ was given so little attention, I do hope more genre fanatics stumble across this obscure horror, even if that doesn’t necessarily mean it’ll receive praise from all. Final Rating: 5/10. 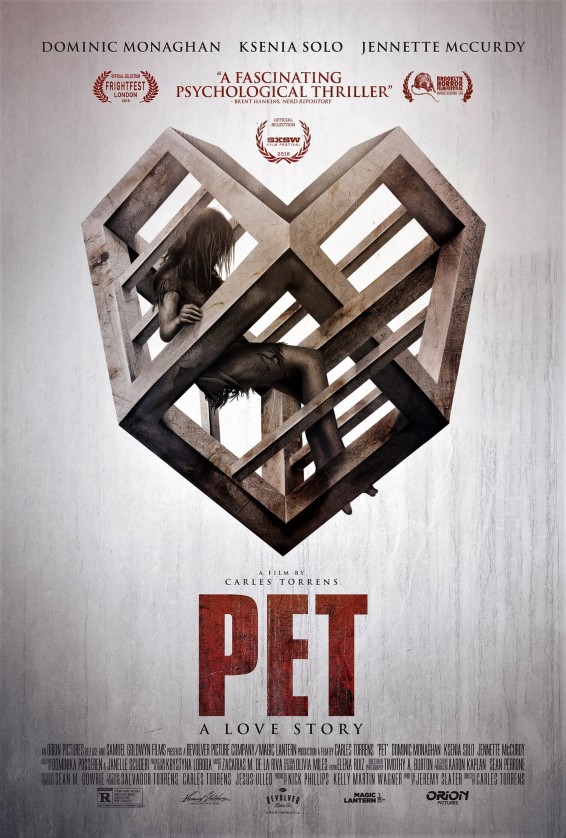