An intricate and satisfying adaptation of the novel of the same name by Gillian Flynn, which went on to be a New York Times bestseller following its release in 2012, being hailed by many publications as a literary masterpiece. Gone Girl, released in 2014, flawlessly combines its maze-like plot with the distinct style of director David Fincher (Seven, Fight Club, The Social Network) and a duet of astonishing performances from Ben Affleck and Rosamund Pike. Promptly resulting in an unmissable mystery-thriller that represents an exceptional pairing of filmmaker and source material, fully expressing Fincher’s cynicism regarding the current age of televised media and the darkness lurking just beneath the surface of contemporary life.

Plot Summary: On the occasion of his 5th wedding anniversary, former New York-based writer, Nick Dunne, returns home to find that his wife, Amy, has vanished. After reporting her disappearance to the authorities, the couples’ public portrait of a blissful marriage soon begins to crumble as the cases’ ever-growing media attention places Nick as the prime suspect, ultimately leading everyone to ask the same question… did Nick Dunne murder his wife?

Making her screenwriting debut, Gillian Flynn does an extraordinarily efficient job of streamlining her four hundred and thirty-two-page novel, retaining its bifurcated structure and elaborate twists without significantly altering the story as a whole. Certainly not an easy task as the very nature of Gone Girl‘s story requires the film to be constantly jumping through time, depicting the entire timeline of Nick and Amy’s marriage from their first encounter through to the total collapse of their love life, giving the audience a clear understanding of their individual personalities and relationship. And through it all, Amy remains a consistent screen presence, continually popping up in flashbacks to her earlier, happier days living in New York City, where she led a life of luxury as a thriving children’s author. That is, until her relationship with Nick, a working-class Midwesterner, comes into focus, gradually draining Amy of her individuality, which is only worsened by the pairs’ eventual layoffs and relocation to Nick’s hometown. Quickly spawning whispers of spousal neglect, infidelity and domestic violence, all of which are condensed for the sake of the film’s runtime, yet never feel rushed.

Both Ben Affleck and Rosamund Pike are phenomenal throughout the film with not a single weak moment between them as Affleck, who has never been more ideally cast, delivers a captivating balancing act of a performance, fostering sympathy and the suspicion that his true self lies somewhere between shallow husband and heartless murderer. While Pike, who has actually had very few lead roles despite her extensive filmography, is continuously emphatic and commanding. What’s more, is that Gone Girl is a film that doesn’t aim to paint either of these two characters in a purely positive or negative light. Instead, Flynn frequently leaves it to the audience to decide which character (if any) they should be rooting for as the couple copes with the rapid decline of their marriage in dissimilar ways. The outstanding leads aside, Gone Girl also features a terrific supporting cast of Carrie Coon, Kim Dickens, Tyler Perry and Neil Patrick Harris, all of whom serve crucial roles within the story.

As ever, Fincher’s regular collaborators turn in work of an exceedingly high standard with Jeff Cronenweth’s cinematography being unerringly well-placed in nearly every scene, bringing a drab, underlit look to Nick and Amy’s home, the police station and other North Carthage locations. And although Gone Girl does admittedly have quite the over-reliance on mid-shots, Cronenweth’s intentionally controlled approach does lend itself well to creating many memorable shots, speaking less to visual flair and more to Fincher’s adroit style.

Along these same lines, the original score by Trent Reznor and Atticus Ross is a gloomy composition, invoking feelings of anxiety in the audience with subtle electronic pulses. Allegedly, Fincher’s musical brief to Reznor and Ross was based on a visit he took to a spa in which the accompanying melody was supposed to be relaxing, yet Fincher perceived it as unsettling. And this undoubtedly comes across in Gone Girl‘s score, with tracks like What Have We Done to Each Other?, With Suspicion and Technically, Missing perfectly capturing this idea of a supposedly comforting soundtrack which, in actuality, instils a sense of dread.

Similar to the novel, Gone Girl‘s story is also teeming with compelling themes and social commentary covering a range of topics. On a broader level, however, the story is really about public perception and how televised media builds fabulations that quickly get subsumed as truth, as the American populace is willing to swallow whatever narrative is sold to them without question, a thought-provoking theme that the film never forgets to explore and build upon.

In summary, Gone Girl is a shining example of an adaptation that stays faithful to the source material whilst simultaneously injecting the narrative with its own style, not once letting the story drag nor the suspense settle in its goal of transferring an acclaimed novel to the silver screen. Still, with a plethora of attractive visuals and tremendous performances, along with a handful of darkly comedic moments, I feel Gone Girl would’ve been a memorising film even in the absence of its engrossing central mystery. Rating: high 8/10. 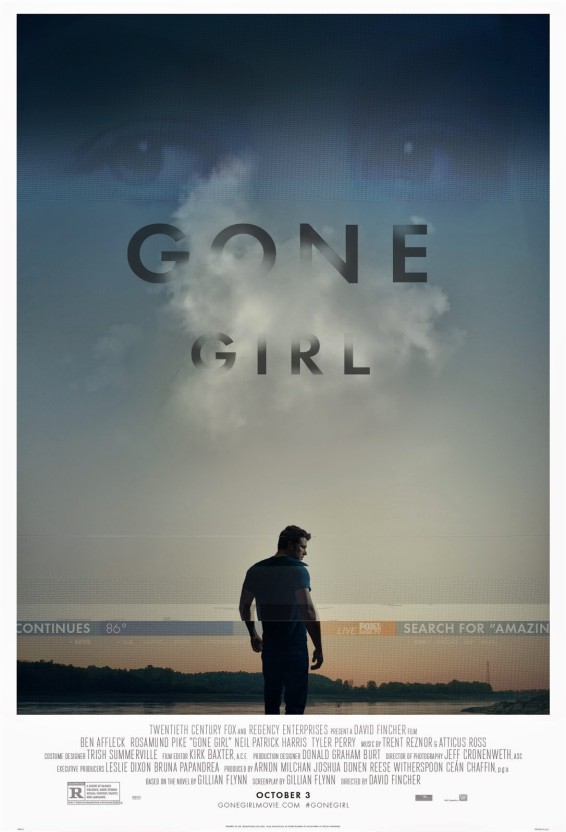