Both starring and directed by Oscar-winner Brie Larson, ‘Unicorn Store’ is a light-hearted comedy/drama which attempts to delve into those childhood dreams many people have, but seems to fall very short in more aspects than one. As aside from a pretty great original score by Alex Greenwald, the film is mostly very bland and forgettable, usually flopping most of the emotional moments and attempts at humour within its fantastical story.

When ‘Kit’ is forced to move back in with her parents after being kicked out of art school, she takes on a boring office job in an attempt to finally grow-up. But when a mysterious stranger sends her an invitation, she is welcomed into a magical store with the promise of owning her own pet unicorn, her greatest desire as a child.

Personally, I do feel this is one of those films where the lack of experience from the director is a big part in what makes it fail overall, as although the writing throughout the film is fairly decent. The film’s visuals as well as the weak performances from the cast, leave the film feeling almost as if it’s presentation doesn’t match with the story itself, and whilst I’m definitely not this film’s main target audience, I don’t even feel young girls could get much out of this less-than-imaginative experience.

Although Brie Larson has given a variety of excellent performances throughout her career, with ‘Room’ and ‘Scott Pilgrim vs. the World’ being the first two that come to mind. Her performance is extremely mixed throughout ‘Unicorn Store’, as in some scenes she fairly decent, whilst in others, she is quite bland. This could also be due to her character however, as ‘Kit’ is very irritating throughout the majority of the film. Portraying the character as childish and loud in all the wrong ways, the supporting cast of Mamoudou Athie, Samuel L. Jackson, Bradley Whitford and Joan Cusack are also pretty decent however, yet do have their weak moments similar to Brie Larson.

Aside from the bright colour palette which does somewhat help to improve the film’s visuals despite not being as overly colourful as I initially expected. The overall cinematography by Brett Pawlak is mostly very dull, as the film is overflowing with a variety of boring shots, all displayed through soft hand-held camera techniques, which I actually found quite distracting throughout. This is also the case when it comes to the lighting, as aside from one visually pleasing scene with the unicorn itself nearing the end of the runtime, every scene is usually very white and pale (which is essentially the complete opposite of the story’s themes).

Alex Greenwald handles the original score for the film as already mentioned, and although not an incredible soundtrack by any means, the score is probably the best element of the film for me. As the original score succeeds where the film’s visuals fail, as the soundtrack embraces the more magical childlike tone of the film, utilizing what almost sounds like wind chimes and harps to fit effectively alongside the film’s narrative.

Despite the story not quite reaching the heights it could in terms of humour and emotion, I do really like many of the film’s ideas. As the film’s themes of letting go of your childhood and growing-up are interesting, and have been explored well before in a variety of Pixar and DreamWorks animated classics. However, ‘Unicorn Store’ seems to not place much emphasis on these ideas aside from a few lines of dialogue from ‘Kit’ herself. Initially, ‘Unicorn Store’ was supposed to be directed by Miguel Arteta, best known for his romantic drama: ‘The Good Girl’ from 2002, and although I don’t think this director would’ve done an exceptional job with the film. I do feel he could’ve explored these themes better, and possibly even made the film more engaging when it comes to its characters, as this was always one of the stronger aspects of his previous works.

In the end, ‘Unicorn Store’ was pretty much what I expected it to be, whilst I could be a little biased due to my distaste of Brie Larson (mostly as a person rather than as an actress). The film simply isn’t that entertaining throughout, with its bland cinematography and lighting, in addition to some of its irritating characters and mediocre story. ‘Unicorn Store’ just isn’t worth it’s time when there’s plenty of other fantastic films currently available to watch on Netflix. Overall, a low 4/10 for this one. 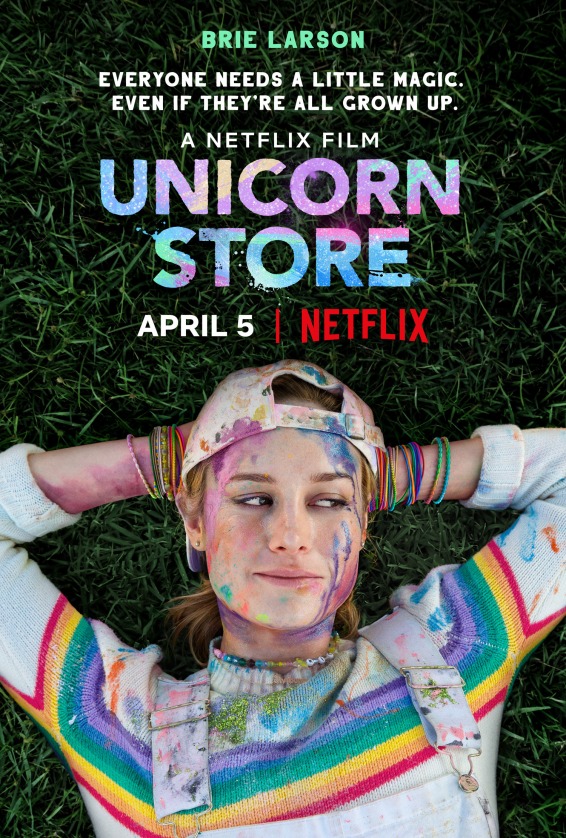