The Aokigahara forest, more commonly known as “The Suicide Forest” or “The Sea of Trees,” is a thirty-five-square-kilometre grove lying at the northwest base of Mount Fuji in Japan. The forest is often cited as the most widespread site for suicide in the country, given that in 2003, over a hundred bodies were discovered in the forest, exceeding the previous record of seventy-eight in 2002. The site became so heavily associated with suicide that a sign at the start of the main trail was later installed to urge suicidal visitors to contact a suicide prevention helpline. So, with all of this notoriety, it was merely a matter of time until a film would utilise the infamous location. Enter, 2016’s The Forest, a supernatural horror flick that sacrifices all of its compelling ideas and despairing real-world setting for cheap, predictable scares and an immensely uninteresting story.

Plot Summary: When orphan, Sara Price, receives a phone call from the Japanese authorities informing her that her twin sister, Jess Price, has disappeared and was last seen heading into the Aokigahara forest, Sara decides to travel to Japan to investigate her sister’s disappearance. But, after entering the notorious forest, accompanied by her Japanese guide, Michi, and American reporter, Aiden, Sara’s investigation begins to send her down a dark path of tormented souls and supernatural occurrences…

Whilst two other films were released before The Forest inspired by Aokigahara, those being; Shawn4Ever in 2012 and The Sea of Trees in 2015, neither film could be considered a horror. And this is what ultimately attracted director Jason Zada (Project Dead Zone) to the project, as Zada was surprised to learn that there had never been a horror film based on the ill-famed site. After discovering that the Aokigahara forest also has a strong association with demons in Japanese mythology, Zada’s interest in the project grew as this information opened the door for a more supernatural narrative. However, the story eventually selected for The Forest is hardly what I’d call engrossing, as while the first act sufficiently sets the story in motion, the narrative quickly devolves into Sara simply meandering through the forest getting sporadically interrupted by blaring jump-scares, many of which are easily foreseen.

Portraying twin sisters; Sara and Jess Price, Natalie Dormer delivers a compelling performance throughout The Forest by lending her acting talents to dual characters. Yet, she is frequently burdened by the screenplay’s lack of characterisation and stale dialogue, which is often as wooden as the trees in the forest. Moreover, the supporting cast of Taylor Kinney, Yukiyoshi Ozawa and Eoin Macken give understandably bland performances as their characters are given next-to-no development and little urgency when it comes to their decisions within the plot.

Since the Japanese government would not allow the filmmakers access to the Aokigahara forest for filming, the Tara National Forest in Serbia served as a suitable stand-in for the location. Aside from the forest itself, however, all of the scenes in Japan were shot on location, and this authenticity does come across on camera. Speaking of the camerawork, the cinematography by Mattias Troelstrup is serviceable, for the most part, as the film makes adequate use of the eerie forest backdrop by implementing a large number of environmental shots, lingering on the calming beauty of the forest in contrast to the tragedies that repeatedly occur within it.

Ominous yet forgettable, the original score by Bear McCreary fits the dreary tone of The Forest appropriately yet lacks anything to make itself distinguishable from other horror scores. Furthermore, whilst there are multiple fast-paced tracks, there is a surprising shortage of slow and moody pieces for a film set in a location like the Aokigahara forest. Nevertheless, I will give McCreary credit for integrating a children’s choir into the score, effectively blending the ghostly juvenile vocals with the rest of the instruments (most notably in the track; Into the Forest), almost as if the choir represents the siren call of the forest.

Interestingly, one of the promotional posters for The Forest features the top half of Natalie Dormer’s face with the bottom half removed, the dividing line between them forming a silhouette of treetops and dangling nooses. This imagery carries a clear resemblance to a photograph of an actual suicide victim once found within the Aokigahara forest; a bald man in such a decomposed state that his jaw had fallen off and strips of flesh were hanging from where it had once been. This photograph is also recreated in the film, albeit in a less grotesque form. Fortunately, outside of this scene, The Forest doesn’t contain much blood/gore, which I’d argue was a good decision on behalf of the filmmakers to remain respectful of the families who have lost loved ones to Aokigahara.

In summary, while The Forest offers Natalie Dormer a few chances to showcase her range through a dual role, it isn’t enough to offset the fact that The Forest is just not all that startling or interesting. Of course, these shortcomings could be attributed to Jason Zada being a music video director by trade, harbouring only one other horror flick in his filmography. But, regardless of the cause, it’s unfortunate, as I feel that given the right attention, the Aokigahara forest could make for a phenomenal setting for a minimalist horror, especially if it’s combined with a tasteful narrative that plays upon the site’s infamy. Rating: low 4/10. 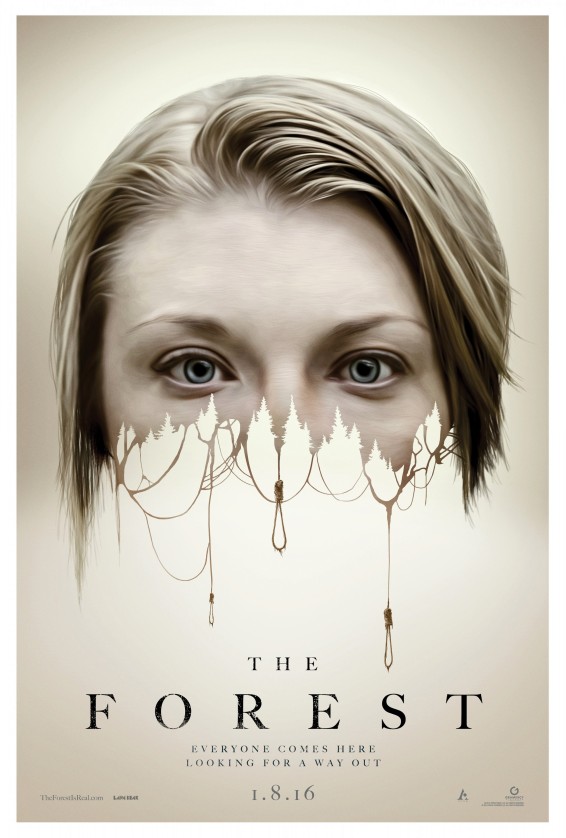