Beloved British action-comedy writer-director Edgar Wright (Shaun of the Dead, Hot Fuzz, Scott Pilgrim vs. The World) returns to the silver screen for another colourful and exciting masterpiece of filmmaking. As one of my all-time favourite directors, writes and directs another wonderfully crafted story, in this fast-paced and pretty thrilling crime flick.

Plot Summary: A talented young getaway driver (Baby), who uses music to drown-out the criminal world around him. Soon meets the girl of his dreams at a local diner, seeing it as his opportunity to ditch his criminal life and make a clean getaway. But he must face the music when a doomed heist threatens his life, his love and his freedom…

As the story would imply, we spend a large portion of the film listening to our protagonist’s playlist just as he does. As nearly every scene with the playlist is timed exactly to the music, every tap, bang and screech. Whatever the location or character, the film never fails to make use of the catchy songs within the narrative, this is also where I have to mention the outstanding editing, as the film is always in sync with the songs, even through it’s cuts to other shots or scenes. The editing is always fast, fluid and perfectly on time, every-time.

The film never really fails at being engaging for the audience due to the combination of the brilliant writing and acting, with the main cast portrayed well by Ansel Elgort and Kevin Spacey. However, my personal favourite of the cast has to be John Hamm as ‘Buddy’ however, who was funny, charming and menacing throughout. This is unfortunately where my one criticisms of the film comes in however, as Lily James’ character: ‘Debora’ although likeable, is given little-to-no development throughout the story, and by the end of the film is nothing more than a bland love interest.

Feeling like a classic Edgar Wright project throughout the runtime, the film always uses a bright colour palette alongside the effective cinematography by Bill Pop, allowing the film to really leap-off the screen. This is also in credit to the brilliant stunts within the film however, as most of the driving in the film was done completely practically, with the main protagonist of the film: ‘Baby,’ even listening to the songs we as the audience hear during many of the scenes for the majority of his time on set.

As perfected as the editing felt whilst watching, the sound design was also extremely on-point. Nothing in regards to audio editing ever felt jolted or out-of-place, as each cut matches up perfectly with the last and works extremely well with the chosen songs. Each audio effect always fitting into the scene no matter the location. Usually not a thing of note in these reviews, but this film did it so well I had to mention it. In addition to this, despite not using an original score for the majority of the film due to the huge list of iconic songs chosen, the original score by Steven Price is decent despite not being very memorable.

In usual Edgar Wright fashion, the film is also crammed with various little hidden visual cues and jokes, many of these are just small things such as having the lyrics of the song ‘Baby’ is listening to spray-painted on the walls behind him. This may not seem like much, but the little details throughout clearly display that the director clearly has a deep passion for the film and has a keen-eye for attention to detail.

While ‘Baby Driver’ has always hit me as a more upbeat version of: ‘Drive’ from 2011, Wright’s fast-paced crime flick is still an extremely well-executed film, having the usual creative flair we’ve come to expect from this director, in addition to an engaging story, fantastic editing and some brilliant songs chosen throughout. And with such high-fueled fun on display, how could you not love ‘Baby Driver?’ Final Rating: high 8/10. 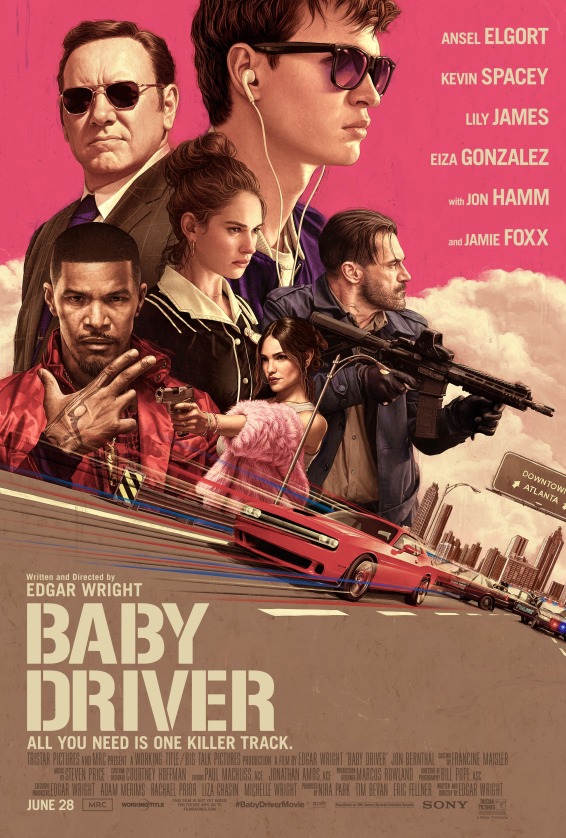