Matthew Vaughn, critically acclaimed director of: ‘Layer Cake,’ ‘Kick-Ass’ and ‘X-Men: First Class’ tries his hand at another comic book adaptation with ‘Kingsman: The Secret Service.’ Based on the comic book series of the same name by Mark Millar, and serving as a throwback to (and often parody of) classic spy/espionage films such as the ‘James Bond’ series and ‘The Bourne Saga,’ ‘Kingsman’ very quickly became a beloved franchise after just its first instalment, mostly as a result of its hilarious self-aware moments of humour and exhilarating action set-pieces.

Plot Summary: When the British spy organisation: ‘Kingsman’ recruits an unrefined, but promising London street teen into the agency’s ultra-competitive training program. ‘Eggsy’ begins to follow in his father’s footsteps as he takes-part in the organisation’s many dangerous training exercises. All the while, the twisted tech genius: ‘Valentine,’ begins to execute a master plan which will potentially put the entire world at risk…

Violent, thrilling and fun, the first ‘Kingsman’ film was actually made partly in conjunction with the comic book itself, as director Matthew Vaughn and comic book writer Mark Millar have been good friends for many years since they collaborated previously on ‘Kick-Ass’ in 2010 to great success, prompting them to reunite for: ‘Kingsman: The Secret Service.’ Which aside from a few minor changes, is actually a mostly faithful adaptation of the first entry in the comic book series, alongside also being a superb gateway into the world for any non-fans of the comic series as the film establishes who the ‘Kingsman’ are and what they do, in little time.

Protagonist: ‘Gary Unwin,’ usually going by his nickname: ‘Eggsy,’ is portrayed by Taron Egerton in one of his earliest film roles, who does portray a reckless teenager very well, becoming an instantly likeable character within only a short amount of screen-time. Its Colin Firth and Samuel L. Jackson who both steal the film with their fantastic characters however, as both actors play completely against their usual type here, with Firth taking on the deadly spy: ‘Harry Hart’ who rarely even smiles (creating quite a contrast from his usual romantic-comedies) and according to second unit director Bradley James Allan, even did 80% of his own stunts during filming. Whilst Jackson also gives one of his most memorable performances to date as the film’s antagonist: ‘Valentine,’ who throughout the film retains an aggressive lisp and occasionally childish demeanour, a big leap from much of his previous work.

Although not as outrageously creative as it could’ve been, in my opinion, the film’s cinematography by George Richmond does serve the story very effectively. As many of the film’s over-the-top and exciting action scenes are displayed proudly and clearly without too much use of hand-held camera or excessive editing. During a few scenes, the camera even begins to spin around the characters as they fight, giving the film a real sense of movement.

The original score by both Henry Jackman and Matthew Margeson has quickly become very beloved similar to the film itself, and it’s easy to see why. As the film utilises its trumpet-heavy orchestral score to create a soundtrack which would fit perfectly within a classic espionage series like ‘The Avengers,’ ‘The Ipcress File’ or ‘The Man from U.N.C.L.E.’ From ‘Manners Maketh Man’ and ‘To Become a Kingsman’ to especially ‘Valentine’s theme, which is noticeably more electronic to fit with the tech-savvy character. Nearly every track featured in the original score is both memorable, and usually, also cut in sync with the film’s stylish editing to great effect.

Needless to say, the aspect that ‘Kingsman’ is most known for is certainly its variety of impressive action sequences, which as already mentioned, do away with the usual overly-shaky and chaotic execution of most modern action flicks in favour of more fast-paced and exaggerated fight choreography with plenty of graphic violence to-boot. Resulting in many entertaining action scenes even if they aren’t completely flawless, as the majority of these scenes do unfortunately, still suffer from their overly-heavy usage of CG effects (usually for blood and severed limbs) which I feel does somewhat take away from many of these thrilling moments, even if they are still sure to impress most on their initial viewing.

Overall, while many spy films may be far more focused on delivering more grounded and gritty missions for their audiences these days, ‘Kingsman: The Secret Service’ truly revels in its absurdity. As even in spite of the problems this stirring espionage film faces, it still manages to remain an amusing and exciting experience throughout its runtime. Combing its array of phenomenal action scenes with some outstanding stunts and a now-iconic original score, the first instalment in ‘The Kingsman’ series may have now launched a blockbuster franchise, but for many, I feel it will always remain their favourite part of this continuing story. Final Rating: low 8/10. 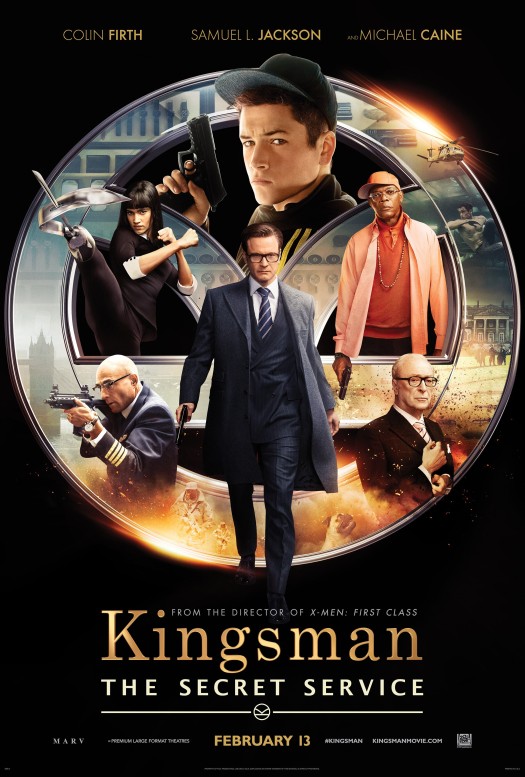