The second outing of the revamped: ‘Planet of the Apes’ series and, in my opinion, the best of the most-recent trilogy. ‘Dawn of the Planet of the Apes’ takes place a decade after the previous film, now taking the story into an apocalyptic world where humans and intelligent apes co-exist. Featuring another spectacular performance from Andy Serkis as ‘Caesar’ as well as a much larger role for the vicious ape: ‘Koba’ this time around (now portrayed by Toby Kebbell), this thrilling and propulsive sci-fi blockbuster is sure to keep its audience glued to the screen.

Plot Summary: Many years after ‘Caesar’s escape from captivity and the outbreak of: ‘Simian Flu’ that followed, the clan of intelligent apes and chimps now resident within the Muir Woods just outside a derelict San Francisco. Living a peaceful existence amongst themselves until a group of human survivors journey into their territory in order to find a solution to their colony’s lack of power, soon leading both sides to consider the possibility of war…

Now giving directorial control over to Matt Reeves (The Pallbearer, Cloverfield, Let Me In), Reeves would write and direct both this film and the following entry in the series: ‘War for the Planet of the Apes,’ allowing Reeves to really give a sense of continuity within the story and style (not to say the sequel doesn’t retain continuity from the first film). Yet what makes this sequel stand-out when placed against the first entry in the trilogy is its narrative focus, as ‘Dawn of the Planet of the Apes’ continuously builds tension throughout its runtime, with much of the film leaning on the two species as they balance on the brink of a war that could desolate both parties.

Andy Serkis leads the motion-capture cast of apes once again as ‘Caesar,‘ developing his character even further after the first film as ‘Caesar‘ now cares for the clan of apes alongside his newly-found family, and just like the first film, Serkis once again manages to make an animalistic ape a far more interesting and likeable character than would initially seem possible. Its the criminally underrated actor Toby Kebbell who shines most within the film, however, as the sequel provides the war-mongering ape: ‘Koba’ with a much larger role, having the ape serve as the film’s main antagonist. In addition to the apes, the film also features a number of human characters portrayed by Jason Clarke, Keri Russell and Gary Oldman, who are all great in spite of their limited screen-time.

Whilst ‘Rise of the Planet of the Apes’ did feature plenty of attractive shots, Michael Seresin’s cinematography is actually an improvement over the previous entry, as the sequel manages to utilise its dim lighting and the overgrown/dilapidated cityscape of San Francisco to fantastic results. The cinematography also helps add too much of the film’s action, as despite the film only containing two action set-pieces, both scenes manage to feel like an excellent payoff to the large amount of build-up before them. Yet personally, I believe one of the most impressive aspects of the film has to be its practical sets, from the overcrowded ‘Human Colony’ to the decrepit streets of San Francisco, nearly all of the film’s sets are breathtaking in both size and detail, with the ‘Ape Village’ being the clearest example of this superb craftsmanship.

Capturing the bleak and ominous tone of the story flawlessly, the original score by Michael Giacchino is also continuously brilliant, and personally, I feel it’s very underrated. As immediately from the stylish opening sequence which informs the audience of all of the events that have taken place prior to this film, the backing track titled: ‘Level Plaguing Field’ really elevates the scene’s emotional impact, with later tracks like ‘Past Their Primates,’ ‘Along Simian Lines’ and the 1968 country-rock song: ‘The Weight’ continuing this trend.

Although it could go without saying, the visual effects throughout are the film are fantastic, while still perhaps not as pristine as ‘War for the Planet of the Apes’s effects, the CG visuals do still hold-up very well since 2014 and contain an immense amount of detail in areas. In fact, the company that created the apes, Weta Digital, were even brought back to bring to life a variety of other animals for the film including: deers, horses, and even a grizzly bear, each sharing the same high level of detail.

To conclude, ‘Dawn of the Planet of the Apes’ is another remarkable instalment in this new series, upping the stakes and visuals from the previous film alongside continuing the story in a meaningful and entertaining fashion. This science fiction sequel is certainly worth a watch, and whilst I would recommend watching the entire trilogy in order to experience the full story of: ‘Caesar’ as a character, if you have limited time or perhaps don’t usually enjoy sci-fi, then I’d say the middle chapter of this trilogy is truly the most exciting and memorable of the three. Final Rating: high 8/10. 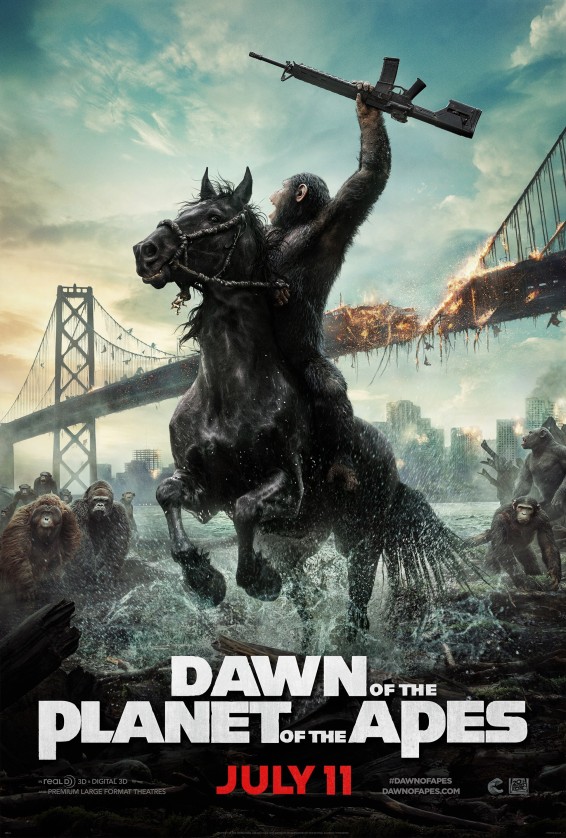