Plot Summary: In the wake of an unexpected pregnancy, ‘Elaine’ and her boyfriend: ‘Jarrod’ travel to Los Angeles to convene with their old friend, now-successful entrepreneur: ‘Terry,’ for a party-filled weekend getaway. But the morning after their arrival, a cluster of strange lights begin to descend over the city, drawing residents outside like moths to a flame as an extraterrestrial force threatens to wipe the entire human population off the face of the planet…

Predominantly visual effects artists, directors Colin and Greg Strause (Aliens vs. Predator: Requiem) financed ‘Skyline’ almost entirely by themselves without the assistance of any major production company, with filming only costing around £372,000, while the visual effects cost an additional £742,000. However, whilst it is commendable what The Brothers Strause achieved on such a low-budget for a blockbuster-level film, ‘Skyline’ eschews a creditable screenplay in order to focus purely on boundless CG spectacle. That is when the film doesn’t just consist of the characters hiding away in ‘Terry’s penthouse, peeping through his conveniently installed telescope to observe the chaos transpiring on the streets below, which, while at first, may sound like an interesting way to experience an extraterrestrial incursion, in execution, is rather dull due to a severe lack of tension, an issue that the later sequels: ‘Beyond Skyline’ and ‘Skylines’ did somewhat rectify.

The film’s biggest downfall comes when we are introduced to the characters, as even when ignoring the apathetic performances from Eric Balfour, Scottie Thompson, Brittany Daniel, Donald Faison and David Zayas alike, the main group of individuals are just no different to the characters of any other alien invasion story. Being given the absolute bare minimum of characterisation, every member of the group (including the two protagonists) feel incredibly underwritten and frequently come across as unlikeable, even if the film does attempt to keep its characters grounded in realism by representing them as genuine civilians, as the characters never contemplate sprinting outside and confronting the extraterrestrial force face-to-face. Instead, they simply hunker down and use what little knowledge they obtain to their advantage.

When it comes to visuals, Michael Watson’s cinematography fulfils its purpose in showcasing the scale of the invasion across the world, but beyond that, the camerawork doesn’t get any more imaginative, primarily relying on hand-held mid-shots and close-ups, never attempting the utilise the claustrophobic penthouse setting (which, in reality, was part of co-director Greg Stause’s condo building) to its full effect. Another element that spoils the handful of pleasant visuals ‘Skyline’ has its use of blue lighting, as although the abnormal blue lights seen throughout the film are a crucial plot component (being the source that draws civilians outside before they are abducted), their constant usage does result in the film having a hefty over-reliance on vexing lens flares, an issue that even extends to the captions/credits.

A mix of both electronic and orchestral tracks, the original score by Matthew Margeson, unfortunately, has quite the shortage of memorability, with simplistic tracks like ‘The Escape,’ ‘They’re Not Dead’ and ‘Arrival’ being nothing but unremarkable. With that said, credit has to be given that the computerised segments of the score do produce an eerie alien-like sound. And whilst on the topic of audio, the film’s sound design is serviceable though nothing spectacular, with the aliens having a daunting set of screeches and grunts.

Featuring over one thousand visual effects shots, ‘Skyline’s main selling point is unmistakably its CG effects and subsequent action sequences, which are actually few and far between due to a large majority of the narrative taking place within one location. Luckily, the rare moments of excitement we do receive don’t squander the extraterrestrial force, from the oily, cephalopod-like ‘Harvesters,’ who possess the ability to purloin and utilise the brains of different species to revitalise themselves, to the towering brutes known as ‘Tankers,’ who use their immense size and strength to tear through buildings, the film’s hyper-advanced extraterrestrials are given some much-needed variety between their designs. Most of the spaceships were even designed from the basis of low-altitude clouds ranging from Stratocumulus to Cumulus, and are all brought to life through some solid CGI, especially when they are seen swallowing masses of the population in one of the film’s most striking shots.

In short, whilst the broad premise of: ‘Skyline’ has promise, the resulting film is fairly predictable. Not only because of its numerous faults, but because the film was fighting a losing battle right from its inception, with nearly every possible idea relating to the concept of an extraterrestrial invasion already being seen. From the original: ‘War of the Worlds’ in 1953, all the way up to the patriotic all-American blockbuster: ‘Independence Day’ in 1996, it’s an onerous task to fabricate new ways of writing an alien intrusion, further proved by the countless other extraterrestrial occupation stories that have freshly emerged. Final Rating: 4/10. 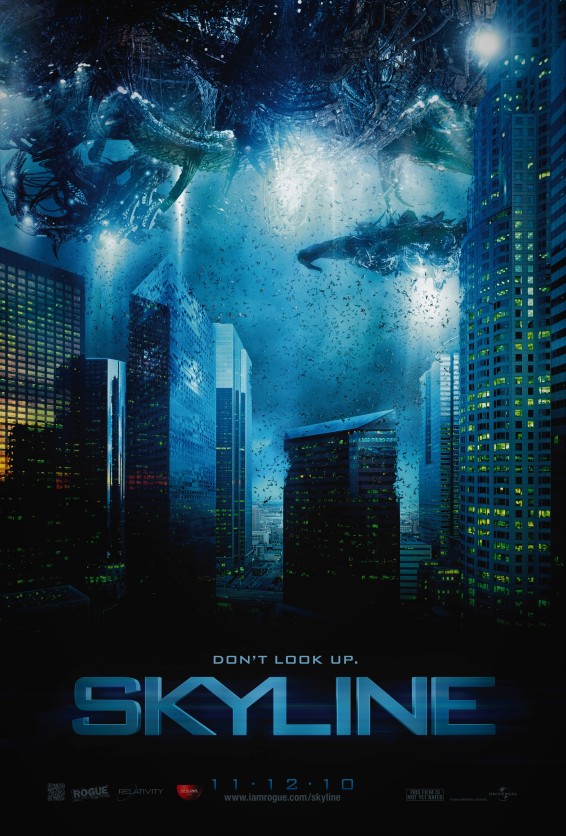