Following the endless string of horrendous, ultra-low-budget shark films produced for the Syfy Channel, some notable releases of which being: ‘Toxic Shark,’ ‘Ghost Shark,’ ‘Sand Sharks,’ ‘Shark Exorcist,’ ‘6-Headed Shark Attack’ and ‘Mega-Shark vs. Giant Octopus.’ ‘The Meg,’ released in 2018, attempted to be an explosive and humorous action blockbuster inspired by these risible science fiction flicks, yet due to its less than mediocre writing, predictable story and often dreadful supporting cast, the film noticeably lacks the thrills or overt cheesiness that make cult sci-fi and horror films so enticing.

Plot Summary: Deemed insane for claiming that a failed submarine rescue was doomed due to an enormous creature lurking within the ocean depths, deep-sea rescue diver: ‘Jonas Taylor’ finds himself heading into the Mariana Trench, five years later, as a team of scientists working for an underwater research facility become trapped inside a crippled submersible after sharing a similar encounter. Soon discovering that the colossal creature corning them is one of the largest marine predators to ever exist… the megalodon.

Even though it’s incredibly rare nowadays to stumble upon a genuinely great shark film, I can appreciate what director Jon Turteltaub (Cool Runnings, While You Were Sleeping, National Treasure) and his crew set-out to do with this film. As it’s obvious quite early on that ‘The Meg’ doesn’t take itself that seriously, having numerous jokes and self-aware lines scattered throughout its runtime, a clear departure from the mostly straight-faced novel: ‘MEG: A Novel of Deep Terror’ by Steve Alten, which the film is partly an adaptation of. However, that isn’t to say that the humour within ‘The Meg’ is quality comedy, as a large majority of the film’s comedic lines feel either forced or childish, with any lines that aren’t intended for humour usually being clichéd pieces of dialogue along the lines of: “What Have We Done?” and “There’s Something Out There!”

While there is an argument to be made that all you really need for an enjoyable summer action flick is Jason Statham and something for Jason Statham to kill, I feel ‘The Meg’ is another film that further proves this method of casting for blockbusters isn’t always the right call. As whilst Statham’s actual talent for swimming is put to fantastic use in this film, Statham often just plays himself, rarely even making an effort to make ‘Jonas’ an actual character. The film’s supporting cast are unfortunately, even worse, as whilst Rainn Wilson seems to at least be having fun portraying ‘Jack Morris,’ the smug billionaire funding the underwater research facility, the rest of the cast e.g. Bingbing Li, Cliff Curtis, Ruby Rose, Page Kennedy and Winston Chao, are all saddled with roles that can barely be described as archetypes.

The film’s cinematography by Tom Stern is creative when it wants to be, occasionally dragging the camera in and out of the water almost as if the camera operator is in the middle of the ocean just beside the characters, which is even more impressive as all of the film’s ocean sequences were filmed within two large water-tanks built in Kumeu, New Zealand, with one tank utilising a two-hundred-foot green-screen on one side for shots above the ocean’s surface. Yet where the film falters in terms of visuals is with the meg itself, as although the CGI that brings the gigantic apex-predator to life is more than serviceable, the film’s camerawork rarely displays the creature’s size in full through wide-shots, which is an abysmal waste of potential considering the film’s megalodon is over seventy-five foot-long.

Furthermore, Harry Gregson-Williams’ original score for: ‘The Meg’ has its moments, but is often disappointing, as despite the film’s signature track: ‘Mana One’ being a coruscating way to introduce the underwater research facility. This track is sadly very underused, only making two more appearances from that point onwards, which is frustrating as the rest of the soundtrack, in particular, the tracks: ‘Prehistoric Species,’ ‘Tracker,’ ‘Shark Cage’ and ‘Beach Attack’ merely sound like tracks taken from any generic action score.

When it comes to the film’s titular creature, many of the visual effects artists who worked on ‘The Meg’ did research into how sharks swim, breathe and hunt in real-life in an attempt to understand how a creature of that scale could realistically be presented on-screen. Most of these supposed details are generally unavailing, however, as the film constantly plays fast and loose with the laws of deep-water biology similar to most shark films, in addition having nearly all of the meg’s kills be entirely devoid of blood.

All in all, whilst ‘The Meg’s goal of modernising a creature-feature storyline and then transferring it into an exciting summer blockbuster is certainly commendable. I’d rather stick to ‘Deep Blue Sea’ for my fill of a cheesy shark flick, as when ‘The Meg’ is lacking, it’s truly lacking, becoming nothing more than a trite and stereotypical mess that is often too formulaic for its own good. Still, the film’s flaws didn’t stop it from becoming a worldwide success, as ‘The Meg’ grossed over £383 million, meaning its very likely that we’ll be receiving a sequel (with many of the same problems no doubt) in the near future. Final Rating: low 4/10. 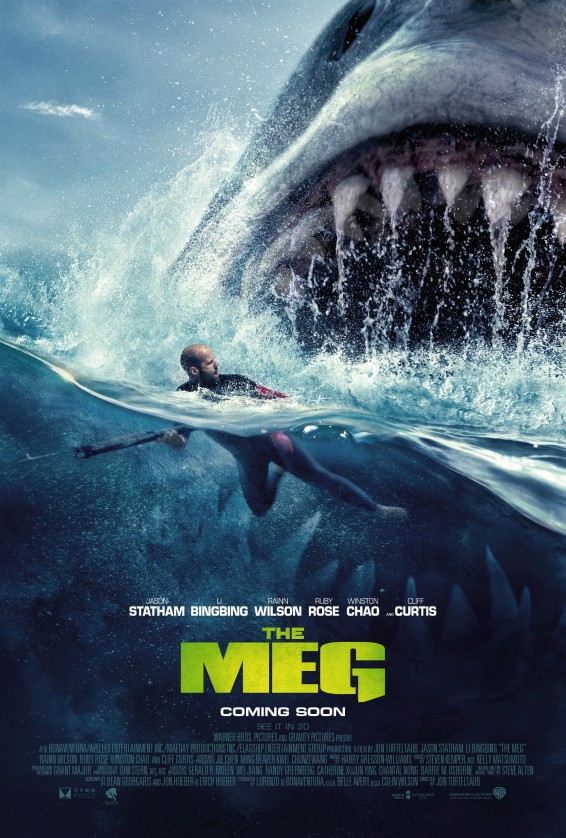